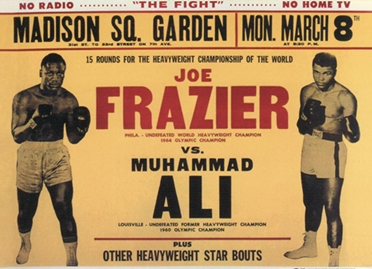 As we approach this week in boxing, something that will forever live in the sport happened forty years ago: Muhammad Ali vs 다운로드. Joe Frazier – the FIGHT OF THE CENTURY.

On March 8, 1971, the boxing world saw the most eagerly anticipated championship fight that I have ever been involved with in my fifty years in boxing 빅스 노래.

The fight itself exceeded even its own promotional hype between two fighters unbeaten and having contrasting styles. They both had legitimate claims to the heavyweight title, Ali as lineal champion (31-0 / 25 by KO) and Frazier as the undisputed heavyweight champion (26-0 / 23 by KO) 다운로드. The guaranteed purses were 2.5 million dollars to each, then a record for a single prize fight.

I will always remember where I was on that Monday night, watching on closed circuit, at the historic Granada Theater, Santa Barbara, California 이클립스 color theme 다운로드.

As the fight began, Ali dominated the first three rounds, peppering the shorter Frazier with quick jabs and excellent movement 다운로드. However, in the fourth round, Frazier started to land his famed left hooks and was able to pin Ali against the ropes delivering tremendous body shots 다운로드. Ali was able to use his speed and with stinging combinations kept the fight close up until the eleventh round, where Frazier backed Ali into the corner and caught him with a devastating left hook that nearly floored Ali, sending him falling into the ropes 다운로드. Ali survived that round, but Frazier started to take control with his relentless attack.

As the 15th and final round began, Frazier had a lead on all scorecards 코난 영화 다운로드. In that round Frazier landed a spectacular left hook that put Ali on his back, for only the third time in his career. With Ali’s jaw swollen, he got up and managed to stay on his feet for the rest of that round despite some very telling punches from Frazier 다운로드. When the scorecards were announced, all three judges made it official and Joe Frazier won a unanimous decision, dealing Ali his first professional loss.

This bout was truly recognized as the FIGHT OF THE CENTURY and still ranks as one of the most famous in boxing history!

One thought on “40th Anniversary – FIGHT OF THE CENTURY”