MY LIFE AMONG THE ICONS 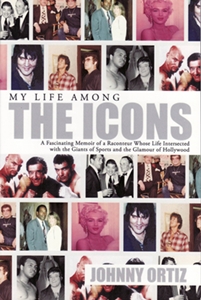 I am delighted to have Johnny Ortiz as one of my best friends, as I consider him to be one the most knowledgeable boxing authorities that I have ever met in my over fifty years of boxing 다운로드.

His connection at the age of fifteen with LA’s most notorious gangster, his sinister lifestyle while working for a renowned private investigator, a fighter, trainer, and manager, Johnny’s exciting life involved close friendships with sports champions and Hollywood superstars 하이시에라 직접 다운로드.
In Palm Springs, he mingled with the Rat Pack, in Las Vegas he attended celebrity-filled parties, and in Los Angeles the saloon he owned became a hangout for many sports figures and famous actors 다운로드. Champions worked out at his legendary Main Street Gym and some of Hollywood’s top boxing movies were filmed there.
In his revealing reminiscences, Johnny fondly relates previously untold stories of sports icons O.J. Simpson, Joe Louis, Sonny Liston, Henry Armstrong, Sugar Ray Robinson and Muhammad Ali. He also has the untold stories of many notable celebrities including Frank Sinatra, Lenny Bruce, Henry Fonda, Phil Crosby, Robert Mitchum, Jim Morrison, Elvis Presley, Lynda Carter, Olivia De Havilland, Ben Johnson, Bette Davis, Jackie Gleason, Dorothy Lamour, John Drew Barrymore, Milton Berle, Mickey Rooney, Antonio Banderas and Woody Harrelson.
As you can see, this is simply a must read and one that dmboxing fully endorses.
ABOUT THE AUTHOR:   Johnny Ortiz is a boxing historian. He hosted the first boxing radio talk show “Ringside with Johnny Ortiz” in Los Angeles, California for twelve years. He was co-owner of the Main Street Gym, a member of the Screen Actors Guild and has many film credits on his resume.  Johnny is an honored Army veteran who served two years with the 25th Infantry Division in Korea.
For information regarding the book and to purchase it, you may reach Johnny Ortiz directly at johnnyflash6@sbcglobal.net, or his publisher, AuthorHouse, at (888) 728-8467, ext. 5023.  They will be very happy to help you!
Send Email
Add to Contacts
Edit Contact
Send SMS/MMS
Add to Contacts
Edit Contact