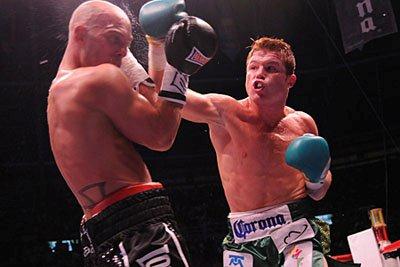 This past Saturday, HBO boxing after Dark had an evening of knock out boxing as the card featured knock out artists in both bouts.  Adrien Broner came into the bout as an undefeated fighter with 16 knockouts in 20 wins against the tough Jason Litzau, who goes for broke.  In the second bout, Mexican sensation Camelo Saul Alvarez challenged British veteran Ryan Rhodes 다운로드.

In the opening round of the first fight, Litzau and Broner posed more than fight as they felt each other out with little action until the last thirty seconds when Broner attacked with vicious combinations.  The Broner attacked began with a left hook that missed followed by a right that stunned Litzau.  The right hand paralyzed Litzau for a brief moment and Litzau did not quite know where he was; Broner added a solid right, left hook, a right upper cut that send Litzau eyes rolling back and then concluded with a left hook sending Litzau down along the rope.  The referee did not bother to count as it was self evident that Litzau was not going to get up 가정부 미타.

In the main event, Rhodes and Alvarez exchanged a few polite punches before Alvarez exploded with some combinations near the end of the first round as he connected on a series of combinations with the right hand showing the most pop 다운로드.  Alvarez showed patience in the second round as he waited to see what Rhodes, who jabbed tentatively as the memory of those stinging rights in the first round still fresh in his minds.  When Rhodes turned southpaw, he proved vulnerable to Alvarez’s right as Rhodes looked ineffectual 성경 찬송 무료 다운로드.

Alvarez showed some defensive skills as he moved his head against Rhodes and avoided many of Rhodes’ punches.  Alvarez occasionally would attack and never feared his opponents’ power 다운로드. Rhodes started to connect on a few punches in the third round but they had little effect.

In the fourth round, Rhodes tried to move closer but he felt the impact of Alvarez’s power as Alvarez unleashed quick combinations 다운로드. With 45 seconds left, one of those combinations ending with a right hand sending Rhodes down for a brief moment but Rhodes spent the rest of the round retreating to avoid any more power shots.

In the fifth round, Alvarez mixed up body shots with head shots as he slipped right crosses and left hooks to the body.  Rhodes’ corner essentially told their fighter, “Forget about points; you have to knock the guy out to win.”  Rhodes knew that in Mexico that he would have trouble winning a decision but he found out early, Alvarez punches carried power plus he had hand speed.   Rhodes connected on some solid shots in the sixth but they had little impact on his younger opponent.

After eight rounds, it was looking like a white wash as Rhodes did very little to discourage his opponent and in the eighth round, Alvarez body shots made Rhodes winced.

The ninth and tenth were not much different from the rest of the fight and with two rounds, Rhodes had a problem. He had not worn down or hurt Alvarez and Alvarez could hit Rhodes anytime without fear of reprisal.   In the final round, Alvarez came out to end the fight and he unleashed a series of combinations which Rhodes did little to deflect. Alvarez continued to press and a six punch combination pounded Rhodes, forcing the referee to stop the fight. Nor was this a controversial stoppage as Rhodes’ corner was ready to throw in the towel.

Alvarez showed that he is a star rising in the junior middleweight division as he combines power with solid technical skills as he brushed aside Rhodes – by twelfth round TKO.