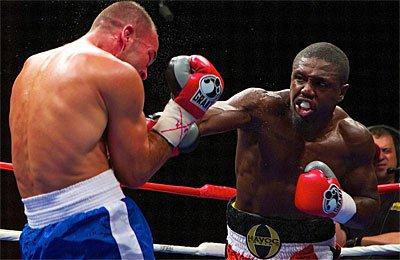 Andre Berto was scheduled to fight on HBO but not the fight that he expected.  A few months ago, Berto was readied for a possible fight with Floyd Mayweather, Jr 킹덤스토리 다운로드. but it was Victor Ortiz who ended up with the fight after he upset Berto.  Berto had his chance when he had Ortiz down in the sixth but Ortiz did not wilt and even knock Berto down in the same round.  From that point Ortiz won the decision and Berto now is fighting to get back into the Welterweight elites 다운로드.

Prospect Gary Russel began the evening by fighting veteran Leanilo Miranda in an eight round fight. Russell began the fight by coming forward and boxing against the cautious Miranda but neither fighter did much damage even though Russell connected on some solid shots at the end of round.  At the beginning of the second round, Russell pushed Miranda to rope on several occasions and nailed Miranda with combinations including a right hand hook from his southpaw stances.   As the third round progressed, Russell quick hands started to take hold as he continued to walk Miranda down while nailing Miranda with three and four punches combinations but Russell power had yet to punish Miranda bullet force 다운로드.

Russell showed a variety of skills as he stuffed Miranda with solid body shots that caused Miranda to flinch for the first time in the fight during the fourth round.   Miranda punches lost steam as he started to absorb Russell best shots.  The fourth round caused a change in strategy for Miranda as he decided to come out on the attack in the fifth round, but this lasted only about thirty seconds as Russell superior hand speed took hold and forced Miranda to retreat 다운로드.

This continued into the sixth round as Russell quick combinations drew blood over Miranda right eye and nose as Miranda started to resemble a punching bag as part of training session cars 다운로드.   Over the final two rounds, Russell went on cruise control as he nailed Miranda with shots from all angles and occasional play defense as he simply avoided Miranda shots.  Russell won an easy decision against a veteran fighter, so he took a step forward toward from leaving being a prospect to a contender pc용 카카오톡.

Jan Zavek came in the fight with a belt, the IBF Welterweight championship and Berto wanted a piece of the Welterweight title.  Both fighters began the fight on each other chest as both exchanged inside shots early.  Berto landed a few solid body shots and Zavek countered with his own body shots 다운로드. Both fighters landed solid shots as they checked each other chins early.   Berto had the advantage of the quicker hands which may have given him the advantage in the first round 해리포터와 죽음의 성물 2 다운로드.

Berto started the second round with quick combinations but Zavek went into a turtle defense to block many of the punches, even though a couple connected.   Zavek even managed to connect on a couple of rights against Berto who took them well.  Berto landed some effective body shots in the third round that appeared to make Zavek flinched but Zavek connected on some solid shots of his own as he done in the previous rounds.  Berto hand quickness allowed him to connect with more combinations 다운로드.

Zavek found some success with some sharp inside punches and started to push Berto around the ring in fourth round and for the first time, he looked like he was turning the table on Berto 다운로드.

Zavek right eye started to swell in the fifth round but Berto showed swelling under the left eye as both fighters started to nail each other with vicious shots including rights to the head, vicious body shots and Berto added upper cuts.  When Zavek came back to his seat, his right eye was swollen shut and the left eye was cut. Zavek wanted to continue but his corner feared for his safety as he couldn’t see out of his right eye and his left eye was started to close as well.   After the fight, Zavek eyes were mere slits but this was a close fight for five rounds as both fighters nailed each other in close quarter.   Berto shot some nasty upper cuts near the end of the fifth round that was probably responsible for the eyes closing.

Over the first five rounds, Berto was the more active but Zavek increased his accuracy as the fight progressed. Berto punches had more pop as he busted up Zavek’s face and that was the difference as Zavek could not continue.  For Berto, this was a good fight for he came back from his lost to Ortiz to fight against a tough opponent with a belt.