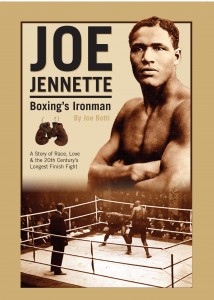 Win By KO Publications is proud to announce the release of

In this first and only biography of New Jersey heavyweight boxing contender Joe Jennette, author Joe Botti chronicles the life and career of this interracial athlete who competed in the longest boxing contest of the twentieth century 다운로드. From 1904 to 1922, Jennette faced and defeated the most dangerous fighters of his era, including Jack Johnson, Sam Langford, and Sam McVea. Jennette was unable to secure a title shot due to the fact that the world was fixated with finding a Caucasian boxer to defeat Jack Johnson in the “great white hope” era 다운로드. The story deals with the struggles of interracial romance, racism, and the world of boxing in the early twentieth century.

The 448-page book contains over one-hundred rare photos, many never before published 다운로드.

The book is available on amazon.com and other internet booksellers.