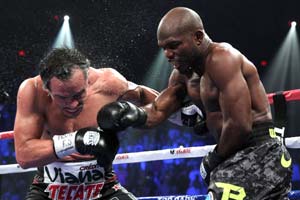 Member Boxing Writers Association and has contributed to dmboxing.com since 2008 다운로드.
Tim Bradley came into his fight with Juan Manuel Marquez as an undefeated fighter who still had much to prove to the boxing world.  His victory over Manny Pacquiao was a controversial split decision and he survived two knockdowns in a vicious toe to toe battle with Ruslan Provodnikov; thus he came into this fight with two very difficult victories and the questions; how good of a fighter was Bradley 다운로드.
Bradley fight with Marquez was a compelling fight since Marquez is one of boxing best counter puncher and at the age of 40, Marquez skills is still near the top of the welterweight division.  Marquez last fight was his most memorable as he was getting rocked by Pacquiao in the sixth round before he launched the perfect right hand, sending his rival down for the count 다운로드. Like many older boxers, Marquez still had the taste for the sport and was not ready to take his last victory over Pacquiao as the last chapter of fighting career.  Like Bernard Hopkins, Marquez still had skills to compete with younger fighters.  Marquez, like Hopkins, has a high boxing IQ and he would be the taller fighter 다운로드.

Bradley goal was to use his quicker hands to frustrate the older Marquez and this showed up early in the fight.  Bradley darted in and out to use his quickness to pot shot Marquez.   In the second round, Bradley doubled up his jab and landed right hands.  He landed some body shots in the third round and Bradley quickness on the outside allowed him to control the real estate between both fighters 다운로드.

As the first half of the fight progressed, Bradley turned this into a technical fight and forcing Marquez to become the aggressor.   A natural counter puncher, there were times that Marquez looked perplexed and slow as Bradley darted in and then out of reach of Marquez’s right hand 다운로드.
In the past two fights, Bradley found himself in wars with powerful punchers but on this night, he showed to be prudent with his strategy. This did not produced a great fight but it allowed Bradley to dominate most of the fight as he set the pace and was the busier fighter 다운로드.
Marquez managed to stun Bradley with a sold right near the end of the ninth round and he followed up with a second right. For the first time Bradley was hurt in the fight.   In the middle of the tenth round, Bradley landed a solid right hand while Marquez landed hooks and both fighters traded right hands as the round closed.  Bradley continued working in jabs throughout the eleventh round and landed a chopping right in the early right.   Marquez let loose shots of his own and even sneaking a couple of rights of his own to score Clip studio paint ex download.
Bradley felt confident that he had the fight in hand as he worked on not getting hit from big shots while Marquez attack on the rope but no significant punches landed.  Over the last minute, Marquez landed a lead right followed by a left while Bradley connected with a jab.  Marquez threw a combination that Bradley dodged while he landed the most telling blow; a left hook that nearly sent Marquez down 다운로드.
One judge had Marquez winning 115-113 while other two judges had Bradley winning 115-113 and 116-112.  Most ringside observer had the fight even wider 자바 url 호출 파일 다운로드. Bradley used his footwork and speed to outwork Marquez and secure the victory.
Marquez showed that while he slowed down from his peak, he is still one of the best in the welterweight while Bradley put himself in position for another big fight.  While Bradley wants Mayweather, he may end up fighting the winner of Pacquiao-Rios bout.
No one will view this as a classic but then Bradley chose to fight a smart fight and avoided a shootout with Marquez and his right hand.   This fight saw strategy triumph.