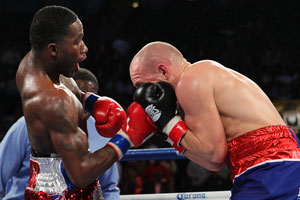 By David Martinez
HBO World Championship Boxing showcased two mis-matches on Saturday night February 16, 2013 at the Boardwalk Hall in Atlantic City 카타나 제로 다운로드. WBC lightweight title holder Adrien Broner (26-0 / 21 by KO) completely outclassed former WBA junior welterweight title holder Gavin Rees (37-2-1 / 19 by KO) with a fifth round stoppage 이클립스 jdk 다운로드. Although Rees came out swinging from the opening bell, Broner took complete control of the fight in round three and dropped Rees with a right uppercut in round four 다운로드. Round five was the beginning of the end for Rees, as a huge body shot put Rees down as his corner waved the towel and the referee halted the bout at 2:59 of that round 다운로드. Broner said after the bout that he would fight anybody at 135 pounds and would consider moving up into weight at 140, and, personally, I feel he would have no problem cleaning out that division if he were to do so 다운로드.

The opening TV bout on HBO reminded me of a one sided bout back in November 2000 when Lennox Lewis (my opinion) won every round against David Tua by using his jab so effectively to win an easy twelve round unanimous decision. So in a bout that was billed as a WBC super middleweight title eliminator, Sakio Bika (31-5-2 / 21 by KO) used his jab in the same manner as Lewis and won every round (my opinion) scoring a twelve round unanimous decision over the unknown boxer from Serbia, Nikola Sjekloca (25-1 / 7 by KO). The official scorecards were 119-109, 118-112, 120-108, and for the record the respected Harold Lederman of HBO had the bout 120-108.