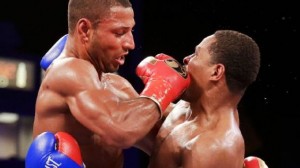 Then Jason Gavern, a last second replacement against Deontay Wilder (who was originally scheduled to fight Bermane Stivine) in a fight that Wilder didn’t look sharp or motivated against tough guy Gavern. Gavern stayed on his feet for four rounds but after hitting the canvas twice and only being in shape for a five or six rounds; he retired in his corner 다운로드. Wilder did not look impressive and this may have been due to Wilder knowing Gavern hardly to be a top tier fighter.

In other action, undefeated Haskell Lydell Rhodes faced Puerto Rican John Nater. Rhodes simply outclass Nater throughout the bout with solid combination. Despite being the smaller fighter, Rhodes landed effective jabs before using combinations to head and body and near the fourth round, Rhodes sent Nater to the canvas with combinations starting with the right hand.  Nater took a knee after being pummeled with some big combinations and retired in the corner, allowing Rhodes to win by TKO 다운로드.

Omar Figueroa faced Daniel Estrada for Figueroa WBC lightweight title in a battle of two big punchers. Over the first two rounds, Estrada landed some solid left hooks and rights but Figueroa close the gap against the taller Estrada as he landed effective body shots followed by rights to the head.

From the second through the fifth round, Figueroa landed the bigger punches and even when they were in the middle of the ring, Figueroa managed to land the more effective punches as he used his jab to set up powerful combinations 유튜브 바로 다운로드.

The eighth round saw Figueroa backing Estrada most of the round but at the end of the round, a clash of heads led to a cut over Figueroa left eyes and this allowed a short rally by Estrada as the seconds ran out of the round. At the beginning of the ninth round, Figueroa sent Estrada down for an eight count and after that, Figueroa went for the kill as he trapped Estrada on the ropes after Estrada got back up. The referee stopped the fight as Figueroa unleashed volley of punches and Estrada did not fire back in return.

Sakio Bika faced Anthony Dirrell in a rematch that their last fight that ended in a draw. The first two rounds saw Dirrell landing the clean punches landed but for most part, it resembled a bar room brawl as oppose to a boxing match. Bika’s style predominated the first two rounds but in the third, Dirrell finally spent most of the round in the middle of the ring; using his jab.

Going into the second half, it was tough fight and while Dirrell managed to land some clean right hands in the fifth and sixth round; Bika connected on occasional shots of his own.  Showtime had the fight scored 59-55 in favor of Dirrell at the halfway point of the fight.

Dirrell won the seventh round with solid shots and he continued to land right hands over the first half of the eighth round but after Bika lost a point for low blow, Bika attack with ferocity as he trapped Dirrell but Dirrell staggered Bika with solid right hand as the round concluded.

As Dirrell won the ninth round, the tenth round was close as Bika trapped Dirrell on the rope where he landed some sharp left hooks instead of his looping punches and added two big right hands. Dirrell used his boxing skills to land solid right hands while Bika never seem to get untracked over the final three minutes. Dirrell took a unanimous decision and became the second cancer survivor to win a title, WBC super middleweight, after a week in which former cancer survivor Daniel Jacobs won his share of the middleweight title.

Shawn Porter defended his version of the title against another undefeated fighter, Kell Brooks. The opening three minutes saw Brook ending the round with solid rights while in the middle of round, Porter used his left jab to swarm Brooks.

In the sixth round, Porter swarming allowed him to land effective body shots. At the end of the round, a head butt opened a cut over Porter’s left eye. Showtime had Brook up by 4 rounds to 2 rounds going into the second half of the bout. At the last thirty seconds of the seventh round, Brooks nailed Porter with a beautiful right that caught Porter off balanced.

Throughout the eighth and ninth round, Brook landed more clean punches where as Porter aggressiveness seemed less effective than in the early rounds. The tenth round saw Porter swarming attacking gaining the upper hand. In the eleventh round, Brook landed four big right hands that turn the tide of fight. Showtime had the fight in favor of Brook but going into the final round, it was hard to determine whether the judges would prefer the swarming style of Porter or the more accurate punches of Brook.

Both men fought equally over the first two minutes of the fight, but Brook closed the show with solid right hands over the final minute.In punches connected, Brook was slightly more accurate but Porter threw nearly 200 more punches more.

Kell Brook won a majority decision 114-114, 117-111, 116-112 to claim the title as he stayed undefeated. Brook kept his composure against Porter’s pressure and that won him the fight. Brook proved that his undefeated record was for real as he beat a very good welterweight in Shawn Porter.