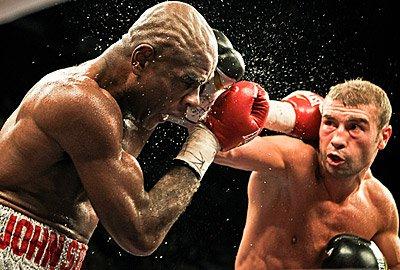 The Road Warrior Glen Johnson was once again traveling to another fighter’s hometown, this fight being in Quebec City, and in the home country of Canadian hero, Lucian Bute.  The first fight featured undefeated Pier Olivier Cote challenging Jorge Luis Teron in a junior welterweight bout.    Cote decided that he wanted a short night as Cote unleashed quick punches, including a super-fast right hand that left Teron looking for the exit. Cote launched into a series of combinations but in the middle of the exchanges, Teron nailed Cote with a right that staggered Cote.  The second round continued the explosion as Cote exploded a left jab followed by a right hand that sent Teron down.  Teron got back up only to be hit with a left hook that opened up blood from Teron nose as Teron went down on his back to the canvas 아이폰 음원 다운로드. Teron sat on the rope for three or four seconds before crawling away from the ropes but he couldn’t get up.  Cote won with a spectacular knockout.

In the main event, Johnson and Bute fought tentatively as both fighters felt each other in the opening minutes of the first round.  The round ended with Bute trapping Johnson in the corner with quick combinations as Johnson tried to figure out how to counter a younger and faster fighter 다운로드.

Bute quickness seemed to have paralyzed Johnson into inaction as Bute maintained the distance between the two fighters.  Bute seemed to have upper hand as he looked comfortable whereas Johnson looked confused with his occasional right hand landed short of his target.  Going into the fourth round, Johnson grappled for answer as Bute started connecting to the body.

Johnson finally connected with a right hand but it appeared to have little impact and over the last thirty seconds of the fifth round, Bute picked up the pace as he unleashed body shots and straight lefts to win the round and maintain his lead on the scorecard 다운로드.

Johnson started to get into the fight as he landed with solid rights followed by jabs but Johnson had not followed up with a left hook whereas Bute showed more variety in his attack. As the second half of the fight began, the only round that could have been called even or in favor of Johnson was the first as round second through the sixth round was all Bute microsoft office 365.

Bute started the seventh round pummeled Johnson around the ring as Johnson started to look his age as Bute simply unleashed his punches; trapping Johnson in the corner.  The eighth round was the same as the seventh, the sixth, the fifth, the fourth, the third, and the second round.   Bute simply took advantage of Johnson reluctance to fight as he wore Johnson down, little by little.  Johnson connected on a few shots but Bute countered immediately in the ninth round with some vicious left upper cuts. The tenth and eleventh round repeated the patterns of other rounds as Johnson threw the one-two, one-two but very few hooks as Bute simply had his way.   Bute buckled Johnson with a left upper cut in the final minute of the final round as Johnson attempted to shoot right hands but to no avail.  Bute went for one final push for a knockout but Johnson remained standing.  Bute showed that he might be the best Super Middleweight as he simply dominated Glen Johnson 다운로드.

On HBO, James Kirkland and Alfredo Angulo faced off in a battle of sluggers, but first Craig McEwan fought Peter Quillin.  In his last fight against Andy Lee, McEwan fought a brutal fight in which he lost by knockout despite winning much of the fight.   At the end of the second round, Quillin landed some solid shots to take the round.

Over the next two rounds, Quillin’s accuracy showed as he connected with solid right hand against McEwan as McEwan’s faces swelled.  At the end of sixth, McEwan walked into a left hook that sent him spinning to the rope, while Quillin nailed McEwan with two rights.   On the second right hand, McEwan looked defenseless for a brief moment but he recovered enough to try to hold his opponent.  Referee stepped in to stop the fight as he saw the second right hand.  While HBO Max Kellerman and Roy Jones felt the fight was stopped early; Kellerman did not see a scenario in which McEwan was going to win 다운로드.

For the first thirty seconds of the main event, James Kirkland backed Angulo up before an Angulo right sent Kirkland down.  Angulo ripped body shots, along with left hooks and right hands.   With a minute left, Angulo ran out of gas as he punched himself out and Kirkland came back and landed some shots of his own.   Kirkland, who was just one minute earlier was out on his feet, suddenly charged Angulo with solid shots and knocked Angulo with a left hook.

Kirkland began the second round on a search and destroy mission as he attacked with every punch in his arsenal.    Kirkland sat in on his punches as he nailed Angulo with some 40 plus punches but Angulo connected with some rights of his own to slow down the Kirkland express 다운로드.

Max Kellerman noted, “On paper, this fight favored Angulo but this is not fight on paper but in hell”  as both fighters exchanged big blows in the third round, taking turns throwing punches as each other.    Kirkland began the fourth round pursuing Angulo as Angulo, who was not use to retreating. Kirkland jabbing allowed him to throw power punch but both fighters showed great chin as they pummeled each other.

Angulo legs looked wobbled but he managed to connect with a right hand in the fifth round but he felled victim to Kirkland vicious body shots and upper cuts.  For Angulo, it was case of survival but with each minute that he survived the chances that he can throw that one punch that can win the fight.  Kirkland continued to press the action in the sixth round as he forced Angulo to the ropes where he ripped right hooks and straight lefts against a defenseless Angulo.   The referee stopped the fight as Angulo had nothing left and his face showed the effects of being pounded by Kirkland heavy punches 다운로드. For Kirkland, this was redemption from an earlier loss to Nobuhiro Ishida this past April.  Back with his trainer Ann Wolfe, Kirkland came back from being knocked down and won a big fight that he needed to win.

Thoughts for the weekend:

The Super Middleweights have some great fighters and Lucian Bute may be the best. Over the past three years, fighters like Andre Ward, Carl Froch and Bute have taken their games to new levels as they moved from contender to superstars.  The good news for boxing fans is that these fighters are in their prime and will be entertaining us not just as Super Middleweights but as light heavyweights and who knows maybe as Cruiserweights.  Bute was a boxer three years ago but now he has changed into a boxer/puncher.  After nearly losing his first fight with Librado Andrade when he survived a knockdown with seconds left in the fight, Bute changed his style and knocked out six straight fights including a devastating knockout of Andrade in a rematch.  He easily dominated Glen Johnson and was never in trouble as he showed mastery of the ring.  The next big fight of this division will be the winner of the Andre Ward-Carl Froch and Bute 4k 배경화면 다운로드.

The big news of the boxing world was Joe Frazier last big fight against liver cancer.  Frazier was one of those fighters never truly appreciated until years later after his career. Like George Foreman and Larry Holmes, Frazier fought in the shadow of Muhammad Ali and no one knew how great these fighters truly were.  Frazier beat every other fighter out there and before his first big fight with Ali, he cleaned out the division before his date with destiny.    For both Ali and Frazier, they had defeated all other fighters and met in one of boxing greatest fights.  They fought 41 rounds over three fights, producing one of the greatest, no, the greatest trilogy in boxing history!   Frazier lost only to Ali and George Foreman, two of boxing greatest 다운로드.

Boxing does some stupid things and one of those things is having two big matches on the same night.   This past Saturday night, Showtime featured the Glen Johnson-Lucian Bute bout while HBO had James Kirkland- Alfredo Angulo.  Both fights were attractive events but can’t promoters at least check calendars before they schedule fights.  For example could one network have the fight on the fifth and the other previous week?    The goal for boxing should be maximum profits and ratings and one way is to make sure that you don’t have two big events on the same weekend!  Is that so difficult?

This weekend big event is Manny Pacquiao and Juan Marquez.  On paper and based on past bouts, this would be considered an even fight but there are two things to consider.  Marquez is closer to 40 and Pacquaio is closer to his peak.  This is a fight about will for both fighters have something to prove. Marquez wants to prove that he is the better fighter and he should have won the first two fights whereas Pacquaio wants to send Mayweather a message by knocking Marquez out.  The one difference in the past two fights was Pacquaio’s power which resulted into four knockdowns in two fights. The knockdowns were the difference in the first fight resulting in a draw and the second fight ending in a close victory for the PacMan.    The real issue is at the 38, Marquez have enough quickness to counter the fast hands of Pacquaio.  He does have the style to compete with Pacquaio but it is about quickness and power.  That is why Pacquaio wins.