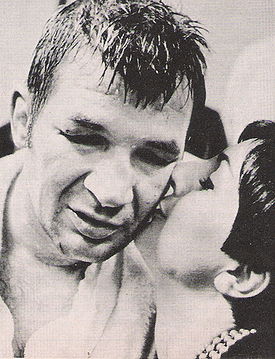 No doubt the most well known heavyweight to come out of Canada is George Chuvalo 다운로드. For a while Lennox Lewis called it his home and Trevor Berbick made his mark but George is still #1 in Canada. Nevertheless there is a very overlooked heavyweight contender from the 1960’s who at one time was closing in on a world title shot 세인트세이야 오메가 다운로드. His name was Robert Cleroux. The fact is that “Big Bob” had a trilogy of bouts with Chuvalo for the Canadian heavyweight title. Cleroux won two of those contests 다운로드.
Cleroux was born on February 23,1938. He joined the punch for pay ranks in 1957 after winning the Montreal Golden Gloves title in 1956 다운로드. At 6’1” and weighing over 200 pounds, he was a fairly big heavyweight in his era. He won twelve of his first thirteen contests. Only a draw with Eddie Vick stained his record 다운로드. He beat Eddie in a return go. Vick would go on to fight the likes of Tommy “Hurricane” Jackson. Chuck Wepner, Jeff Merritt and Bob Foster twice during his career 다운로드. Bob invaded New York’s Madison Square Garden in 1959 and suffered his first loss. An eight round decision to veteran Buddy Turman.
Cleroux would regroup to win nine in a row including a decision over Willie Besmanoff and a five round kayo against Roy “Cut-N-Shoot” Harris 다운로드. In 1960 he won a close and hard fought split decision over Chuvalo to capture the Canadian crown. Later in the year he would drop a twelve round verdict to George losing the title 차트스쿨 다운로드. In between those two battles, Bob halted Turman in two rounds to gain a measure of revenge.

1961 was a good year for Robert as he stopped Harold Carter,Harris again and the hard hitting Alex Miteff 슈프리마 다운로드. He then won another split decision over Chuvalo to recapture the Canadian heavyweight championship.  He defended that title by knockout over Cecil Gray and then stopped rugged George Logan in seven 다운로드. Then Bob hit a rough patch dropping ten rounder’s to the highly rated Zora Folley and tough Mike DeJohn. He then won a close points call against Tom McNeely. Cleroux followed that with four straight knockout victories and was again paired with the clever Folley. Zora clearly out boxed Cleroux and Bob stepped away from the ring for five years.

When Cleroux returned in 1968 he quickly won five straight bouts. He then out duked the still dangerous Cleveland Williams to re-establish himself as a contender for world honors. In 1969 he whipped Charlie Chase twice and Bob Felstein. It was now rumored that Bob was going to challenge Jimmy Elis for the WBA version of the heavyweight title. In July he met Billy Joiner in a tune up bout. Joiner, a former Ohio standout amateur boxer and capable professional fighter upset the apple cart by winning a ten round split decision. With this defeat Cleroux’s hopes for a title shot were dashed and he retired for good.

In 55 fights Bob posted a very respectable 48-6-1 record. He won 38 by knockout and he was never stopped.