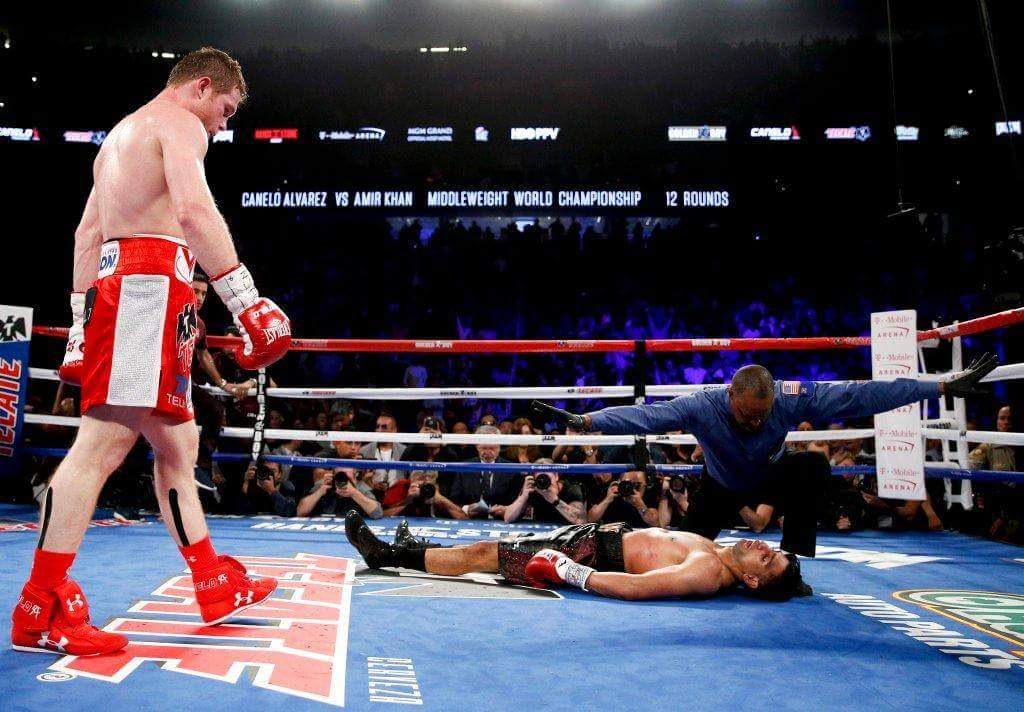 Contributor to dmboxing.com since 2008

Amir Khan started his bout against the hard punching Canelo Alvarez with a solid right hand while using lateral movement over the first three minutes of their bout.  He landed a couple of four punch combinations to take the first round.   Khan boxing showed Alvarez that he was the faster, more technically skilled fighter 다운로드.

Alvarez stalked his opponent in the second round and threw two big punches that missed the quicker Khan.  Alvarez wanted to impose his power and size against the smaller Khan and Alvarez even lifted up Khan in a clinch.  Alvarez went to the body in an effort to slow Khan down but Khan concluded the round with a series of combinations as he maneuvered Canelo into the advantageous positions 다운로드.

Alvarez started the third round with a big left hook with the idea of decapitating Khan but after his big miss, he did connect on a left hook but Khan responded with left of his own while pivoting Alvarez into positions to nail the Mexican with combinations 다운로드.  Beginning in the fourth round, Khan stayed outside and continued his movement while zipping out quick jabs. Alvarez started to connect with body shots as he landed a solid left to the body while Khan continued jabbing.

Alvarez landed his own jabs but he was not able to catch his mobile opponents, who was not taking any unnecessary risks against the more powerful Alvarez.  Khan won the round with his fast hands and mobility but Alvarez landed some solid shots, including a left to the body.

Khan began the fifth hand and landed two punch combinations in the center of round while Alvarez landed a right hand.  Alvarez started to close the gap on his opponent, who was eluded Alvarez less and less.  While Khan held the advantage, the question that remained, could Khan win a decision?  Many ringside observer were wondering if the impossible could happen; Khan actually winning the bout.  Khan had yet to hurt Alvarez but Alvarez had difficulty in cutting off the dancing British fighter.

Beginning in the sixth round, Canelo landed two punches while Khan punches landed short of their target.  Alvarez nailed Khan with a right to the body while adding a strong jab while Khan moved to the side.  Khan threw a punch that Canelo slipped and boom, Alvarez nailed Khan with a picture perfect right hand, sending Khan to the canvas.  Khan was out even before he hit the ground.  With one big blow, Alvarez took a three or four point deficit on the scorecard and turned into a grand slam home run.

Alvarez won his expected knockout victory and while Khan is a good fighter; he often hit the canvas in big bouts. Khan suspect chin proved decisive and throughout the bout, he never really hurt Alvarez but with one punch, Alvarez ended the fight. The bigger, stronger puncher did what was expected of him and now the big question, will Golden Boy allow Alvarez take on the best Middleweight Gennady Golovkin.

The challenge will be to make this fight happen as Alvarez is the bigger draw but Gennady Golovkin may be the better fighter and certainly a threat to Alvarez.  The question is what kind of deal can reached between the two as Triple G’s will to face on reality, the bigger draw is Alvarez and will Triple G’s be willing to take a smaller cut?