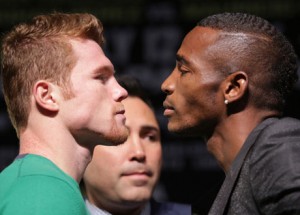 Saul “Canelo” Alvarez facing Erislandy Lara featured two fighters at their peak and at best weight.  Both fighters also featured two styles of making it to the top  Alvarez been a professional since he was 15 and now nearly 24, he is now at the top of his game whereas Lara has spent much of formative years fighting amateur boxing at the highest levels for Cuba before making his run for freedom and America.  Two fighters, approaching their careers in two different fashion, now fight in a statement fight that will determine their place in their careers and possibly boxing history.

The card started with fireworks as WBO bantamweight Tomeki Kameda nailing Pungluag Sor Singu with the perfect left hook to the liver to defend his title.  In a fight that was close for the first six round, one punch and it was over.

Through the fifth and sixth round, Herrera retreated to the ropes and tried to counter Perez, who used his height to advantages as he landed more combinations.  Starting from the 8th round and through the 10th, Herrera took control of the bout but in the 11th, Perez  switched southpaw to momentarily confuse Herrera but in the final round, Herrera held the advantages in a round that saw both fighters having their moment.  Herrera held the slight advantage in compubox and he won a majority decision as two judges had it 116-112 in his favor but one judge did have it a draw 더 히트 다운로드.

The second bout saw Juan Manuel Lopez facing the undefeated Fernando Vargas and the first round featured a more of a feeling around bout as neither fighters showed any aggressiveness.  Vargas pressed the action in the second round and even stunned Lopez with a big right followed by a left hook but Vargas did not rush in as he feared Lopez’s power 오늘밤에 mp3 다운로드.  The third round saw both fighters go after each other as Lopez connected with right hooks but near the end of the round, Vargas landed a solid fight hand that staggered Lopez and a left hook sent him down for an eight count.  Lopez barely made it back to his corner and Lopez’s corner stopped the fight.   This was Vargas biggest fight and he proved to be impressive.

Abner Mares goal was to avoid his second consecutive bout against Jonathan Oquendo, a tough Puerto Rican.  Oquendo took an aggressive approach as he attempted to nail Mares with his left hook and even landed some solid body shots.  In the fourth round, Oquendo opened up a cut over the left eye and attacked with ferocity.  Mares used his feet to avoid Oquendo’s power shots and counter with quick combinations throughout the fifth round.  Showtime had Mares ahead four rounds to one going into the second half of the fight and Mares used his footwork and speed throughout the sixth round to frustrate Oquendo.  Near the end of the seventh round, it was Mares who trapped Oquendo on the rope and landed quick combination as he continued to outwork Oquendo.

Throughout the eighth and ninth round, Mares continued to outwork Oquendo who kept waiting to deliver his combinations while Mares started most of the exchanges.  Mares stayed discipline throughout the bout and Oquendo fail to pressure Mares with the exception of the fourth round.

The main event was not for a title except of each other. In the olden days of boxing, this was not uncommon for two champions to fight at a catch up and not put their title on the line. If there was demand for a rematch, then the fighters would fight a second time; this time a title would be on the line.  This was classified as a special attraction with the goal of making a ton of money and who knows, if the bout proved to be a close one; a rematch would be in order.

Lara began the first round by boxing and landed combinations at will as Alvarez simply did not let his hands go nor did he succeed in forcing Lara to the rope.   Alvarez began the second right by jabbing and attempting to land combinations as well as left hooks to the body.  Lara used his footwork to maneuver around Alvarez but over the last minute, Alvarez landed two big body shots but Lara managed to shoot out his jab to counter the more aggressive Alvarez.  Lara used every inch of the round in the third round as he landed one-two and then moved away while Alvarez threw wild punches that missed.

At the beginning of the fourth round, Alvarez connected on solid body shots as he finally close the gap between Lara. Alvarez finally showed off his power, in particular to the body as he landed solid shots. Lara landed a few solid shots but less often than the previous three rounds. Alvarez right eye started to swell due to Lara’s left.   The first minute of the fifth round, Lara nailed Alvarez with head shots but as the round continued, Alvarez landed body shots but kept missing Lara with head shots.   Lara dominated most of the sixth with slick combinations but over the last thirty seconds, Alvarez landed some big body shots.

Near the end of the seventh round,  Alvarez right hand upper cut open up the cut over Lara’s .  Throughout the eighth round, Alvarez started to throw combinations body to the head as Lara hand speed slowed down.  Alvarez continued to attack and Lara eyes bleed profusely as Alvarez appeared to take control of the fight. The tenth round was close as Lara landed big combinations while Alvarez landed big shots to the body.  Lara returned to using his footwork as he avoided Alvarez haymaker while connecting on combinations. Alvarez landed effective body shots but nothing of major to the head.  Lara slightly more accurate 107 to 97 and the judges had it close  a split decision with one judge having it 115-113 Lara and the other two had it  115-113 Alvarez and 117-111 Alvarez.  I had it 116-112 for Lara while Showtime Steve Farhood had it 115-113, but there were three rounds that were close and could have gone either way. Brian Kenny had it the opposite of what I did 116-112 for Alvarez.  115-113 for Alvarez was reasonable but there was no way that Alvarez won nine rounds.

This was good fight with both fighters doing what they do best as Alvarez landed effective body shots but Lara showed defense wizardry as Alvarez missed many shots and Lara connected on solid shots.  Team Alvarez did not want this fight but Alvarez did and he won by a whisker.  I doubt that Golden Boy will be that anxious to have a rematch but there should be.  This was a close, competitive fight but Golden Boy will not put their golden cow up against Lara if there is chance a rematch goes the opposite way.  The Showtime discussion was enlightening and I agree with Paul Malignaggi points that Martinez score was off base and Lara boxing generalship should have been credited.  Al Bernstein added that Alvarez got credited for body shots and that was right. While I admire Brian Kenny but his failure to credit Lara boxing skills and yes, he moved around the ring but that was his best shot to win.  There were many times that Alvarez simply missed his target and it is his responsible to cut off the ring to force the fight.   The decision was not controversial since there were rounds that could have been judge either way and compubox showed the closeness of the bout.  It is possible to have Alvarez with seven or eight rounds and vice versa.  This was a fight, did you like the boxer or the slugger?