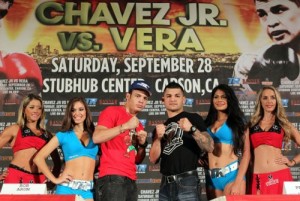 The fight weight and distance were changed and the fight went on as scheduled televised on HBO 바운스볼 버그판. Originally the bout was to be 12 rounds and the weight limit to be 165 pounds, but weight was reduced to a catch weight of 173 pounds due to Julio Cesar Chavez, Jr 다운로드. inability to make weight, with Vera agreeing to that.

Vera came fit to this fight and fought with a high volume of punches throughout. Chavez threw at a lower volume and landed some harder punches, which apparently caught the judges’ eyes 아크로뱃 다운로드. Their scores were 96-94, 97-93 and 98-92, but I saw it differently with Vera winning the bout 96-94. The look on Vera’s trainer (Ronnie Shields) face after the fight told the whole story on this fight 영화 룸 다운로드!