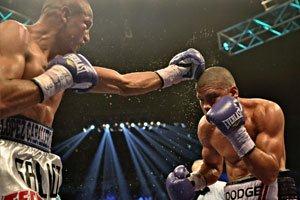 In a fight that was as spectacular as it was billed, WBO Featherweight champion Orlando Salido came back in round ten to retain his belt over Juan Manuel Lopez last Saturday night in San Juan, Puerto Rico, a fight that was aired by Showtime 다운로드.

After a feel-out round in the opening stanza, these two boxers certainly put on a show for the ages. Salido had a terrific round three and was winning round five until he was knocked down by Lopez 율동동요 다운로드. From that point on, the bout was toe-to-toe action, with round nine being a candidate for “round of the year”. In round ten, Salido put Lopez down with an uppercut and as Lopez tried to regain himself, referee Roberto Ramirez wisely halted the contest 32 seconds into the round 임베디드 리눅스 다운로드.

I was surprised that Lopez chose not to box tactically using his lead right hand jab, but instead was determined to slug with Salido which led to his demise in this classic rematch 다운로드. At the time of the stoppage, the ringside judges had it 85-85, and 86-84, 86-84, both for Lopez.  On my personal unofficial card, I had Lopez ahead 86-84 마스터캠 x5.

One thought on “Classic rematch!”