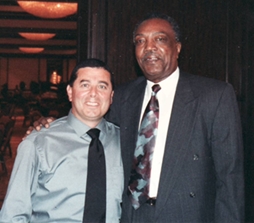 Not too long ago one of my favorite writers, Ted Sares asked me if I could come up with some bouts as he described them as “closet classics” 컴퓨터 바둑게임 다운로드. I came up with a few for Ted. Here recently I was making a tape for a friend. One of the bouts was the 1969 light heavyweight title fight between Bob Foster and Andy Kendall 다운로드. I have a mint copy of this fight and what a war it was while it lasted.

This was Foster at the peak of his great career. What a fighter he was 다운로드. Most people remember his devastating power but what they tend to forget is that Bob had a terrific jab. He jabbed on even terms with Muhammad Ali when they met 다운로드. He even cut the “Greatest”.

Andy Kendall was no slouch. He was a rough and rugged customer who met Don Fullmer, Bobo Olson, Eddie Cotton, Roger Rouse and Eddie “Bossman” Jones on his way to this title shot 태교 음악 mp3 다운로드. The ABC broadcast had Howard Cosell and the late Willie Pep at ringside calling the action.

It was a war from the opening bell 다운로드. The shorter Kendall tried to be aggressive and on working his way in he butted Bob on a few occasions. In the ring Foster had little sense of humor and he hit Andy on the break drawing a warning from the referee. Bob had a ten inch reach advantage and he wasted little time establishing his fine jab. Bob also launched several punishing rights to Kendall’s head. Andy was game to the core as he absorbed the punishment and kept moving forward. Although Andy lost the first two rounds, he made a statement in round three. His aggression was beginning to pay off and he finally got to Bob in round three. He rocked Foster on a couple of occasions and the fans loved it. Now it was a fight!

Bob must have sensed this as round four began as he came out and took charge. There was a brutal exchange but Andy got the worst of it and staggered into the ropes. Foster was right on him pouring in punch after punch. The courageous Kendall tried to fight back but Foster was a great finisher. Finally Kendall sank to the canvas. His inner toughness forced him to rise before the ten count but the referee had seen enough and waved the fight over. Foster had retained his title but he knew he had been in a fight. You could see it in his eyes that he admired the stubborn courage of Andy Kendall.

Foster would fight on and forge his legend. Kendall would fight on too. He would meet men like Dick Tiger, Larry Buck, Mike Quarry, Pat O’Conner, Jorge Ahumada and Yaqui Lopez and will always be considered one of the best light heavyweight contenders of the Bob Foster era.

One thought on “Closet Classic: Bob Foster vs. Andy Kendall”