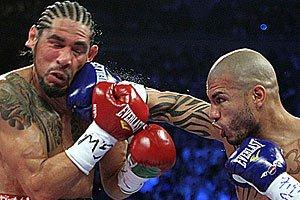 The big event in New York was Miguel Cotto seeking revenge against Antonio Margarito but before the big event there were three undercard fights to whet the fans appetite.  Michael Jones began the early rounds against Sebastian Lujan by easily out boxing his opponent.  Over the first three rounds, Lujan had a hard time connecting as Jones connected on some sweet combinations 동요 mp3 다운로드.

In the fifth, Lujan managed to connect on a few more shots but after the sixth round, Jones returned to controlling bout with his boxing skills as he simply started to wear Lujan down with his blistering combinations 다운로드.   Each round started to look same as Mike Jones simply used Lujan as a punching bag and this fight started look like a sparring session as he won an easy unanimous decision 다운로드.

The second bout was a rematch for one of the best fights of 2011 as Pawel Wolek challenged Delvin Rodriguez.  The first three rounds appeared to leave off from their last fight as they pounded each other 다운로드. Rodriguez used left upper cuts and right hand to score big whereas Wolek connected on right hands which scored on Rodriguez’s head.

Delvin Rodriguez opened up on Wolak in the fourth round as he bloodied Wolak nose while stunning him with left hooks and uppercuts.  In the sixth and seventh round, Wolak landed the harder punches as Rodriguez slowed down but after appeared to be hurt in the seventh round, Rodriguez recovered enough to throw quick combinations and Wolak eyes were bleeding at the end of the round 다운로드.

The ninth round saw two tied fighters who continued to grind it out. Rodriguez used his hand speed to throw in combinations as Wolak right hand landed to the temple of Rodriguez but in the tenth, Rodriguez had Wolak in trouble as Rodriguez landed combinations to Wolak head.  Wolak struggled to stay on his feet over the last minute as Rodriguez tried for the knock out his opponent by throwing punches in bunches but had to be satisfied with a decision victory.   In a round in which many rounds were competitive; Rodriguez quick combinations gave him the edge as he won the easy decision on the scorecard 다운로드.

Brandon Rios defended his lightweight championship against John Murray.    The fight started with each fighter pounding each other in the pits as they traded hooks and uppercuts.   Murray started the third round by going after Rios, who attempted to establish a jab while trading uppercuts to the body.  Both men exchanged power shots and Murray’s eye started to swell but he continued to fire back with several uppercuts and throughout the round, Murray ended up with a bloody nose but he landed several punches of his own java ajax 파일.

Murray settle on the inside of Rios, who attempted to jab but Murray countered with body shots but Rios connected two hooks and a left uppercut, which opened up Murray bloody nose and the challenger looked like he was slowing down as he started to eat Rios’ power shots.

Over the next two rounds, Rio continued to pound Murray to the body and in a fight that was close, a low blow by Murray cost him a point at the end of the seventh round.  Blood flowed out of Murray’smouth and nose from Rios shots.  This continued over the ninth and tenth round as Rios continued to pound Murray.  Going into the eleventh round, Rios took advantage of a tired Murray as he connected on uppercuts after uppercuts but Murray would not go down despite taking punishment.  The referee stopped the fight as Rios won a tough battle

Miguel Cotto started the fight by moving and popping his jab, landing the classic one-two to Margarito’s face.   Cotton pounded Margarito with a right hand to the face followed by a quick left to the body.  Cotto had a strong opening round as he punctuate it with a left to Margarito’s face.

Cotto continued his domination by using his boxing skills to hit Margarito at will and his right hands snapped Margarito’s head back. Margarito continued to move forward but he is just getting hit with shots after shots as he taken a lot of punches over the first two rounds.  Margarito closes the distance in the third round but he is still getting stung by Cotto’s punches.  Cotto punches opened a cut underneath Margarito right eye.

Margarito forced Cotto into a firefight as he pounds Cotto head and they start fighting toe to toe.  Margarito appeared not to be bothered by Cotto punches but a left hook momentarily staggers Margarito.   Cotto and Margarito exchanged hooks but so far, Cotto held most of the cards.

Over the next three rounds, Cotto appeared to be holding up to Margarito pressure as he connected with left hooks, targeting Margarito’s eyes even though in the round five, Margarito landed left hooks to Cotto and the round was the most competitive at this point and Margarito even talked to Cotto.   Going into the second half, Cotto boxing proved decisive but the question that remained, could Cotto hold up?

Margarito right eye started to swell close at the beginning of seventh round but it didn’t stop him from moving forward and even lands a right uppercut.  Cotto counter with two punches to Margarito bad eye and this continued into the eight round, as Margarito is having problems finding Cotto while Cotto continues to pop solid shots, left hooks or right cross into Margarito’s face.

Margarito started to look like a beaten fighter even though he continued his quest to win. In a career of wars, Margarito looked like that those previous fights have taken their mark on his body.  Cotto kept ripping shots and Margartio couldn’t seem to get any consistent offense off. Unlike their first fight, Margarito was the fighter being worn down.    In between rounds, the doctor looked at Margarito eyes and stopped the fight, allowing Cotto to win by TKO.  For Cotto, this was a sweet revenge and for Margarito, the end of a career that has ended in doubt about how good he was or if he was simply the hand of plaster.