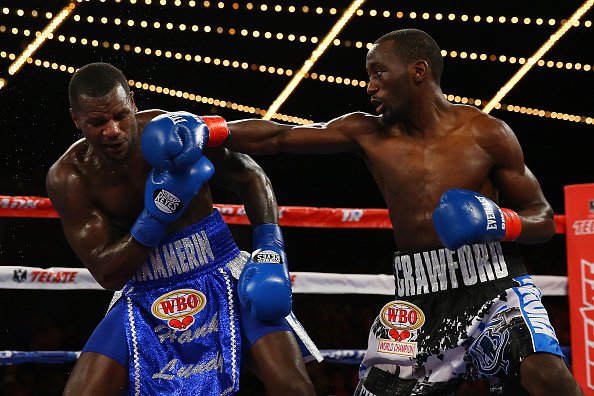 In a televised bout shown on HBO, undefeated WBO junior welterweight champion Terence Crawford ( 28-0 / 20 by KO) successfully defended his title over Henry Lundy (26-6-1 / 13 by KO) with an impressive fifth round stoppage on Saturday night in The Theater at Madison Square Garden, New York 다운로드.

Lundy came out fast winning the first round, but after that it was all Crawford. He landed the harder more accurate punches and was most effective in his southpaw stance using the jab 다운로드.

In the fifth round, Crawford landed a left hook that was the beginning of the end for Lundy. Crawford continued his assault scoring a knockdown, and when Lundy got up Crawford was all over him 다운로드. Referee Steve Willis called a halt to the fight at 2:09 of round five.

At the time of the stoppage, one judge had the fight even after round four and the two other judges had Crawford ahead winning all four rounds. My scorecard was 39-37, three rounds to one for the winner Crawford.

In a televised bout shown on Showtime, undefeated WBA featherweight champion Leo Santa Cruz (32-0-1 / 18 by KO) scored a fifth round stoppage over Kiko Martinez (35-7 / 26 by KO) on Saturday night at the Honda Center in Anaheim, California.

Santa Cruz dropped Martinez twice in round one, but the game Martinez hung on to survive the round. In round two Santa Cruz was down, but referee Raul Caiz, Sr. ruled it a slip.

The third round was action packed, as Martinez drew a cut just below his right eye. In round four Martinez appeared to be the aggressor, but Santa Cruz fought from the outside using the ring effectively to his advantage by boxing and moving.

In round five, Santa Cruz caught Martinez with a flurry of punches as the referee stepped in to stop the bout at 2:09 of the round.

How ironic that on the same night at two different locations, Crawford and Santa Cruz both won in the fifth round and at the exact same time – two minutes and nine seconds!

One thought on “Crawford and Santa Cruz Impressive with KO Wins”