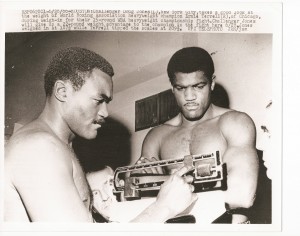 Impressive? You bet! Here’s more. He gave “The Greatest” his toughest pre championship fight and to this day there are many who feel that the decision rendered that night was a travesty 하이시에라 직접 다운로드.

For some people timing is everything. Take Lennox Lewis and Roy Jones Jr. Talented boxers who were fortunate to come along when their respective divisions were void of serious challenges. Then take Jerry Quarry. A talented fighter who just happened to box in the greatest era of the heavyweight division. Go figure.

Doug turned professional in 1958 and won his first nineteen fights facing light heavyweights as well as heavyweights. He established himself as a viable contender in 1960 with two wins over Von Clay and a six round KO of Bobo Olson. 1961 wins over Rademacher and another over Von Clay led the unbeaten Jones into a match with the highly rated Machen Nanumgothic download. Doug lost the verdict but little stature.

In his next bout Doug met the classy Harold Johnson for the vacant World Light Heavyweight championship. The clever Johnson outboxed Doug in this 1962 contest and Jones dropped his next bout on points to Zora Folley. Showing the tenacity that molded his career Doug bounced back to score kayos over Bob Foster and Folley in a return match 다운로드.

On March 13, 1963 Doug took on the unbeaten and highly touted Olympic Gold Medalist Cassius Clay in a sold out, jammed packed Madison Square Garden. It was the night that the roof almost caved in on young Cassius. Maybe he underestimated Doug. Who knows? The fact is that Doug hurt Cassius early and often. It didn’t take Clay long to realize that he was in the fight of his life ! By the middle rounds

Cassius was able to get his jab working. Only then did he climb back into the fight. The officials thought Clay did enough to win. The fans did not. Clay was booed without mercy and Jones who was short ended received the cheers of a winner.

This would be the highlight of Doug’s respectable career. There were ups but also untimely downs like the night Doug was upset by the rugged Canadian Chuvalo. He resurged with five straight kayo wins over mediocre opposition and was awarded a shot at the World Boxing Association heavyweight title held by Ernie Terrell.

On June 28th, 1966 Doug failed on his date with destiny as the bigger, taller Terrell won a boring points verdict to retain his bogus title.Four months later Doug was beaten by up and coming prospect Thad Spencer. Then on February 21st, 1967 Doug became a stepping stone on Joe Frazier’s march toward the heavyweight crown. You could see the end was near but Doug had one more surprise left. He traveled to Seattle and upset their unbeaten prospect Boone Kirkman via a badly cut eye. Boone wanted Doug again and got him. The faded Jones was no match in the return as Kirkman got sweet revenge and Doug got a ticket to retirement.

Doug lost ten of forty one fights. These are not Hall of Fame numbers. It is doubtful that Doug will ever get in the Hall but it is a shame that his name is rarely mentioned when the top big men of the 60′s are brought up. As time goes on his stand against young Cassius is almost forgotten. Doug deserves better then that.