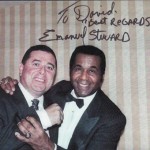 This week the world lost a true icon and giant in the sport of boxing 다운로드. Emanuel Steward passed away on October 25, 2012. Steward died after undergoing surgery for diverticulitis; he was 68 years old.

Steward was a master trainer and HBO commentator 다운로드. He trained 41 world champions throughout his career, most notably Thomas Hearns, Milton McCrory, Mike McMcCallum, Tony Tucker, Lennox Lewis and Wladimir Klitschko 전래동요 다운로드. He was an inductee of the International Boxing Hall of Fame in 1997 and the World Boxing Hall of Fame in 2000.

Born in Bottom Creek, West Virginia, he moved to Detroit, Michigan at the age of 12. Upon moving to Detroit, he began his boxing training at the Brewster Recreation Center, where Joe Louis and Eddie Futch trained. As an amateur he compiled a record of 94 wins and 3 losses, which included winning the 1963 national Golden Gloves title in the bantamweight divison. In 1971, Steward became a coach at the Kronk Gym and went on to train top amateur and later professional fighters.

What I remember most about this amazing boxing man was that, throughout his life, he exhibited the true meaning of the words gentle and kind. Simply put, he was a wonderful human being.