Fighters find themselves in a position, how much risk do I take to entertain the public 맥북 pdf? Erislandy Lara for example had a cakewalk against Delvin Rodriguez as he simply dominated Rodriguez with his superior boxing skills but what he truly needed in the eyes of his promoters and fans was a impressive knockout victory 프랑스어 사전 다운로드.

Lara simply was satisfied with a win and while he is still the WBA Super Welterweight champion, there was nothing in the fight that said, “ Let see this fighter again.”  The one past fighter that Lara reminds me of is Winky Wright, a smooth boxer who often embarrassed more marketable fighters and he was often ignored 다운로드.  Wright finally got his chance for a title and Lara has received his but Lara wants bigger paydays.  Lara is the type of fighter that other fighters ignore or stay away from since he not only can upset a bigger name fighter but the amount of money to made fighting Lara pales in comparison to other fighters 러블리즈 앨범 다운로드.

For fighters and promoters; the decision that a fighter goes into the ring with has as much to do with risk and money as anything else.  Amir Khan most recent fight against Chris Algieri as oppose to fighting for follow Brit Kell Brook’s championship was about a possible future match with Floyd Mayweather 더 캣 다운로드.  A Brook-Khan matchup would sell out in Great Britain but Khan could easily have lost that fight and this would end his shot at Mayweather, which represent even a bigger pay day.  So British fans are denied for now a Khan-Brook matchup but Khan’s gamble was to place himself in a position for the big pay day; a date with Mayweather.  Of course, his less than impressive win over Algieri may have dented the demand for a Khan-Mayweather bout but that is also part of the gamble 우당탕탕 아이쿠 다운로드.

Just as Lara fight with Rodriguez was designed to be a showcase bout for Lara but the question remain, what other champion in the junior Middleweight want to fight Lara?  Have you notice that Saul Alvarez is not jumping to give Lara a rematch?  The reason is simple, the dollars are not there for a rematch and there is a chance that Alvarez could lose a rematch.  Team Alvarez will figure that we won the first bout in a close decision and no sense in testing fate when there are bigger bouts out there like Miguel Cotto 우분투 16.04 다운로드.

Speaking of trying to make a splash, the Deontay Wilder-Eric Molina fight was supposed to be that show case for Wilder.  Wilder owns a portion of the heavyweight title and yes, he did knock Molina out in the ninth round.  Throughout most of the bout, he dominated the action and had Molina down for three previous time in the bout before the final knockdown ended the fight 다운로드. 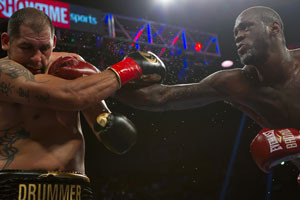 Wilder attempted to do what Lara was supposed to do, be spectacular.  The fans will decide if the knock out was impressive enough and there was no doubt that Wilder’s potential is out there to be seen.  He has power in either hand, as he sent Molina down not only with his right hand but his left hook as well.  On the positive side, he showed more variety with his punches including that left hook than in previous fights and there is no doubt about his power or athlete prowess.  The knock out in front of his hometown screaming fan is the kind of response that promoters love but the bout also showed weakness.  Wilder often kept his hands low and proved vulnerable to an overhand right plus he repeatedly went straight back to avoid punches.  This latter move only made him more vulnerable to Molina rights which occasionally connected and Wilder was stunned by Molina left hook in the third round and eighth round.  Molina proved to be a game fighter but against a better opponent, Wilder may have been the one stopped.  Wilder also threw wild punches when he had Molina hurt or on the rope and this would have made him vulnerable against better opponents.  Defensively the flaws needed to be correct but Wilder is now at the elite level of the heavyweight and his defensive skills need to improve or he will not be champion much longer.  Wilder does have one thing that promoters love, the one punch knockout and he is the best American heavyweight phone screen sharing.