For the past year, we have seen some great boxing and last Saturday night was no exception as two of the top Super Middleweights went toe to toe in Greenwich, England.  Mikkel Kessler and Carl Froch faced off in their second fight as Froch sought revenge for his loss to Kessler three years ago as part of the Super Six tournament 마인크래프트 정식판. 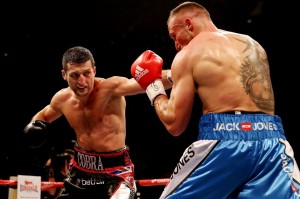 In their first match, Froch threw more punches, connected on more punches but it was Mikkel Kessler who connected on the more meaningful punches to win a close decision.  Since that loss, Froch won five of six fights against the best of the division with his only loss to Andre Ward, the best Super Middleweight in the world.  Among those Froch beat included the undefeated Lucian Bute, who many rated as a possible threat to Ward’s claim to being the best in a spectacular five round pounding.

Kessler has suffered his share of injuries over the past three years including elbows and eye injuries but he won three straight fights by knockout that included an easy three round TKO victory over Brian Magee.  Froch came into the fight at the favorite on the basis of his Bute’s victory and the fact the fight was in his native Great Britain 스타크래프트 다운로드.
In front of rabid 18,000 fans, Froch began the first round jabbing and while he threw the more punches and connected on more, Kessler connected on the more meaningful punch just as in the first fight.   Froch took control of the next three rounds as his jab controlled the real estate and he simply was willing to threw punches while Kessler showed hesitancy.   HBO Max Kellerman noted that Kessler was waiting the perfect moment to release his combination, while Carl Froch was willing to see what will happen.
In the fifth round, Kessler started to unleashed his own combinations as he started to take chances as he unleashed his right hands and left hooks.  At the 1 minute 23 seconds of the round, Kessler nailed Froch with a left hook followed by a right hand that brushed sweat off Froch’s face and then he concluded the round with another combination.   He continued this pace in the sixth round as he continued to use his jab to set up his right hands and left hooks 다운로드. With the fight halfway over, could Kessler put on a second half rally?
Froch got his jab back on track as he used his jab to set up his right hand in the seventh round and this continued through the ninth round.  At the beginning of the tenth round, Kessler snapped a left hook to Froch’s head but Froch seemed unaffected and he went back to jabbing.  Over the last forty seconds of the round, both men landed power right hand shots against each other.
With two rounds left, Kessler reached deep down and used his jab to set up his power shots.  With forty seconds left, a Kessler left hook stunned Froch for the first time in the fight and this set up a wild twelfth round.  Kessler started fast with solid combinations as he continued his work from the eleventh round but halfway through the round, Froch reversed the momentum.  Over the last forty-five seconds, Froch forced Kessler to the rope and landed power shots after power shots.  Trapped in the corner, Kessler was reduced to keeping his guard up as he simply tried to survive the onslaught.  Froch ended the twelfth by dominating his opponent and this clinched victory.
Froch won a unanimous decision by a 118-110, 116-112 and 115-113.  As HBO announcer and Super Middleweight champion Andre Ward observed after the fight, Froch was the clear winner.   HBO Harold Lederman had it 117-111 and I had it 116-112 in favor of Froch.
Froch got his revenge and the data supported his win as he threw more than double the punches and connected on more. Interesting, Kessler connected on more than 50% of his power shots and had a higher accuracy but Froch activity won the bout.  Nor did Kessler power shots succeeded in slowing Froch down as Froch not only took Kessler’s best but his own power shots was more effective.  If Kessler hurt Froch briefly in the eleventh, it was Froch dominated the action against a trapped Kessler on the rope.
So do we see Froch-Kessler 3 or Froch-Ward 2?  Could Froch get Ward to fight him in England? That is the question that many boxing fans are asking.

One thought on “Froch – Kessler”