On October 18, 2014, Gennady Golovkin did to Marco Antonio Rubio what he has done to every other fighter he faced, he pounded Rubio into submission.  This fight lasted less than six minutes and never really was in doubt despite Rubio coming into the fight overweight.  Rubio weighed two pounds over the contracted weight and made no effort after the weigh in to try to lose the extra two pounds.  Rubio figured the extra bulk would allow him to better withstand Triple G’s power but alas, it didn’t do Rubio much good 다운로드. 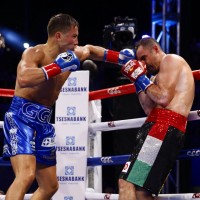 Golovkin is the best Middleweight in the world today and so far, he has made the Middleweight division his personal fiefdom and the question is who can stand up to Golovkin?  Miguel Cotto recently defeated Sergio Martinez but Cotto has his eyes on Saul “Canelo” Alvarez and the big payday that comes with it, so Cotto is not going to fight Golovkin.  And if he did, he would lose 터널베어 다운로드.

Jermain Taylor recently won a piece of the Middleweight division but Golovkin is the kind of fighter that given Taylor problems and does anyone truly think Taylor could even survive a fight with Golovkin?  Taylor was hardly impressive in winning the title against Sam Soliman, who fought much of the fight on one leg 다운로드.