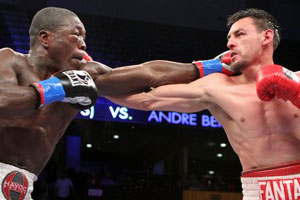 Near the end of the first round, Thurman nailed Quintana with a solid body shot that nearly paralyzed Quintana but Quintana managed to beat the count and the bell saved him. Over the next two rounds, Quintana moved away from the heavy punching Thurman, who occasionally landed vicious body shots.

In the fourth round, Thurman started with two rights and a left hook that sent Quintana to the rope and Quintana fought back for brief ten seconds before Thurman landed two more rights which forced Quintana across the ring and two rights sent Quintana eyes rolling back in his head 다운로드. This led the referee to stop the fight. Thurman looked good against a veteran who has beaten some solid fighters in his own right and I doubt there will be a lot of welterweights and quite a few junior Middleweights not to anxious to meet him.

For the main event, a former featherweight champion Guerrero fought his second fight as a welter weight against one of the more powerful welterweight fighters, Berto. With forty five seconds left in the first round, Berto nailed Guerrero with a right hand but Guerrero countered with two lefts to the body and head before a third left sent Berto to the canvas hy 헤드 라인 m. Berto beat the count and survived the round but went back to the corner on wobbly legs. Berto hit the canvas the second round and Guerrero punches puffed up Berto’s eyes. Guerrero decided to turn the fight into a brawl and this negated Berto hand speed; this continued into the third round but at the end of the third round, Berto managed to land a couple of hard rights.

In the sixth round, Berto wobbled Guerrero with two rights as the round wound down but at the end of the seventh round, Guerrero hurt Berto with straight lefts at the end of the round that stunned Berto 다운로드. Throughout the eighth round, both fighters simply nailed each other with body shots and head shots as blood flowed from each other nose. Berto kept nailing Guerrero with right uppercuts in the ninth round that started to swelled up Guerrero eyes. One upper cut sent Guerrero head up and sweat spraying and Berto concluded with a solid left hook to the body.

Going into the tenth round, Robert Guerrero right eye was swollen nearly shut and he told his dad, who doubled as his trainer; that he couldn’t see out of his eye. Berto eyes were swollen as well but after a dominating ninth round, he seemed determined to fight to the bitter end. The tenth round, like most of the fight, fought in close quarter as both fighters exchanged punches with Berto best shots his upper cut and Guerrero his left to the body 그녀는 예뻤다 2회.

In the eleventh round, Guerrero forced Berto to the rope but Berto fought off the rope with body shots and those potent uppercuts. With thirty seconds, Berto exploded with a left hook to the body and right to the head as Guerrero connected on a straight left.

Berto followed up with two left hooks to the body and Guerrero ended the round with straight left. Over the final three minutes, the two warriors demonstrated what championship fighting was all about. For one hundred eighty seconds, these two fighters stood toe to toe as they simply slugged each other with no stopping in the action. They kept fighting even after the bell as neither fighter could hear the bell ring; exchanging blows after blows.

Guerrero won the fight 116-110 and what carried him through the fight were both his activity and his two knockdowns of Berto in the first two rounds. Berto actually connected on fifty percent of his power punches and usually that is recipe for victory but those two knockdowns put Berto in the hole. Guerrero victory put him in line for a shot at Floyd Mayweather but Berto courage and performance showed that he is still a force to be reckoned with. 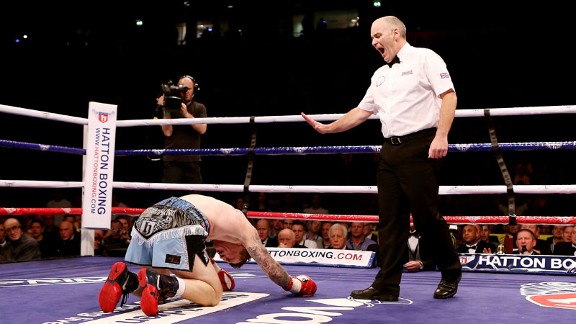 Ricky Hatton, like many boxers who retire, just can’t stay retired. After a good career in which his only two losses were to two Hall of Fame boxers, Floyd Mayweather and Manny Pacquiao, Hatton came back. His last fight was the shocking two round knockout at the hand of Pacquiao and somehow, that defeat still gnawed at Hatton as he wanted as he stated, go out on his own term. However, most fighters find themselves fighting one fight too many and would this fight be that one fight too many?

Ricky Hatton faced Vyacheslav Senchenko, a former title holder and a solid opponent after a three years absence. Hatton was just not facing Senchenko but his demons outside the ring including drug use and family estrangement. The question for Hatton coming into the ring, how much of ring rust would there be and how much of the hard living would affect him?

Hatton attacked from the bell as Senchenko jabbed to set up his own combination. Hatton continued to come forward but without jabbing his way in and forced to eat a few Senchenko jabs. Over the first two minutes, Hatton managed to connect on three or four hooks while trying to slow Senchenko down. The first round was close and anyone guess for both men accomplished what they needed to do. Senchenko attempted to use his five inch advantage but near the end of the round, Hatton did land a couple of solid body shots.

In the second round, Hatton landed left hooks and two solid rights but his best punch was an upper cut that popped Senchenko head back while Senchenko landed two short counter rights for his best punches. After the first six minutes, Hatton punches had more power and he seem to be able to take Senchenko best but Senchenko showed that he could connect with his right.

Hatton continued with body shots including body shots as he looked to slow Senchenko’s movement and with half of the fourth round left, Hatton landed a left hook that staggered Senchenko but at the end of the round, a Senchenko left-right combination snapped Hatton head back for the first time.

For the first five rounds, Hatton pressure was the dominant factor but the question was could Hatton continue to pressure Senchenko in the second half of the fight. At the beginning of the sixth round, Senchenko nailed Hatton with two solid combinations and Hatton started to square off, thus giving Senchenko an easier target. For first time, Hatton looked like he was slowing down as Senchenko managed to keep the fight mostly in the center of the ring. Senchenko continued his momentum in the seventh round as he managed to stun Hatton with his left hook along with the right. As the seventh round closed, Hatton face showed bruising but Senchenko left eye started to show swelling and some blood started to stream. While Senchenko did well for most of the seventh round, but Hatton started to take control of the round as Senchenko retreated to the rope for the final thirty seconds.

The eighth round saw both fighters score with solid shots as Hatton continued to eschewed defense to move forward but this only make him vulnerable to Senchenko’s counter. With two rounds left, this fight could be up for grabs but as Showtime Al Bernstein ask, could Senchenko get a fair shot at a decision?

Senchenko started the ninth round by jabbing which set up his right hand but over the previous three rounds; Senchenko found a home for a left hook. With a half of the round left, Senchenko nailed Hatton with a vicious left hook to the body that sent Hatton down. Hatton couldn’t get up and the comeback ended in defeat.

Hatton could not defeat father time, abuse to his body and the constant battle with his weight as he lost seventy pounds for this bout. Hatton gave his all and for the first five rounds, he was the better fighter as his pressure had Senchenko on his heel but over the second half of the fight, Hatton pressure started to fade as Senchenko left hook ended the dream. Hatton was winning on all scorecards, 78-74, 77-76, 77-76 but it didn’t matter. Father time claimed another great fighter in an ill-fated comeback.