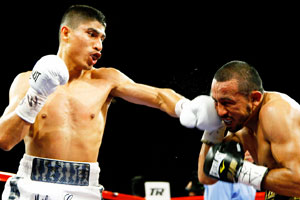 By Tom Donelson / Member Boxing Writers Association
HBO had their night of boxing which began with Roman Martinez going up against Juan Carlos Burgos for the WBO super featherweight title. Burgos lost a previous shot to Hozumi Hasegawa and now was going for Martinez’s title. Burgos showed control over the first eight minutes using his height to its utmost advantage while adding vicious body shots to Martinez. Martinez did manage to trap Burgos over the last 30 seconds of the third round as he closed the distance and unleashed several body shots 앨빈과 슈퍼밴드 다운로드.