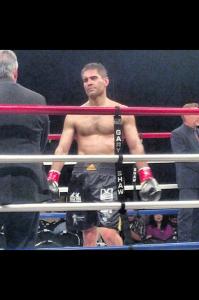 A week after the fight, I have had more than enough time to digest our bout last Friday, August 16, 2013 at the Chumash Casino Resort in Santa Ynez, California, and my feelings on Henry Calles’ debut is that it was a sweet thing; but the decision was disappointing to me 다운로드.

Henry worked ten weeks to prepare for the fight and our Duke’s Boxing Team was right there each step of the way. Henry ran every day to achieve his superior conditioning and, personally, I am so proud of his performance in the ring; but a draw 다운로드?

As I saw the fight from working his corner ringside, Henry won 3 of the 4 rounds. How well Henry did, I believe, was a big surprise to his opponent, Zlatko Ledic sbs 뉴스. 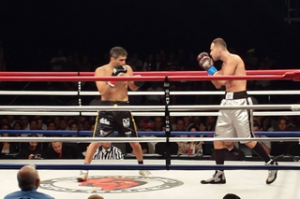 The younger (29 years old) and taller Bosnian Ledic had an awkward style for the 36 year old Calles who adapted quite well to his rival.

The one thing I feared coming into this bout was a southpaw (Ledic) versus a conventional fighter (Calles), but Henry fought through it, including the second round when he was bloodied by head butts. My daughter Laura Danhauer, RN, performed a masterful job stopping the bleeding throughout the fight. 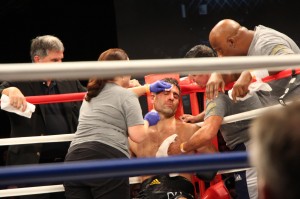 On a ten-point must system, I scored the bout 39-37 and most reporters at ringside also had Calles winning the fight. The official scorecards were 40-36 Calles, and 38-38, 38-38 by the other two judges resulting in a majority draw.

For the promoters it was a “win-win” situation as nobody loses and both fighters come back for a rematch. 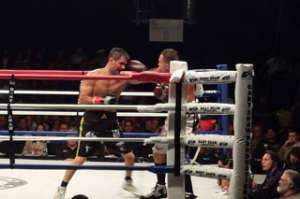 One interesting thing occurred during the fight which I would like to point out.  In the first round, I heard someone in the crowd yell out “George!” … followed a few moments later by another person yelling out “Mino!”  Those are the names of Henry’s two uncles on his mother’s (Calderon) side of family, fine boxers in their own right who introduced him to the “sweet science”.  For that split second, watching Henry from ringside, it took me back exactly 30 years ago to the summer of 1983 when I was the referee for George and Mino’s fights. 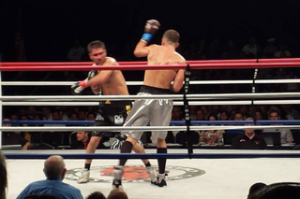 Henry Calles is a true warrior in and out of the ring, and on behalf of our Duke’s Boxing Team, Mark Lee (trainer), Sarah Cammann (manager) pictured below left, and Laura Danhauer (registered nurse) pictured below right, I couldn’t be prouder to have worked the bout.  Also a special thank you to John Palminteri from KEYT Newschannel 3 (ABC-TV) for his coverage and loyal support. We’ll see you at the rematch! 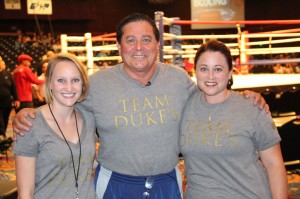 2 thoughts on “Henry Calles’ Debut is a DRAW!”