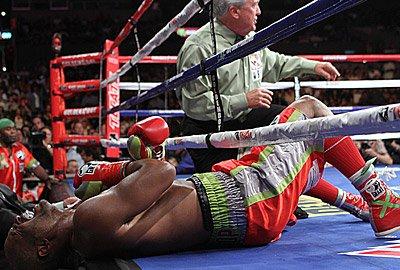 Bernard Hopkins once again decided it was time to teach a young fighter the fine arts of the sweet science. Hopkins goal was to control the pace and fight when he wanted to. Hopkins waited as Dawson moved forward cautiously in the opening moments of the fight 유레카 mp3 다운로드. Hopkins led with a right hand and bull rushed with his head down as he avoided jabs. Dawson missed most of his punches but he did manage to connect on a hook for the best punch of the round with Hopkins lying on the rope.

Hopkins fought at a slow pace, which was the way he liked it at the beginning of the second round. Hopkins landed a right hand but he did try to push Dawson down 다운로드. Dawson landed two jabs followed by short hook. The fight proved to be a rough affair as Hopkins tried to turn this into an ugly affair. The key moment of the fight occurred when Hopkins threw a right and landed on Dawson back, who then threw Hopkins off him. Hopkins landed on the canvas on his elbow, injuring his shoulder. The referee ruled it a TKO as he declared that Hopkins could not continue. The real question was this a true TKO or not 다운로드?

In the opening bout of the HBO / PPV card, Paul Malignaggi used his quick feet and fast hands to keep the tough Orlando Lara off him. The one thing that was obvious, Malignaggi hands were faster as he blistered out four or five punch combinations but Lara punches when they landed had more power. In round three saw Malignaggi outlanding Lora by an 8 to 1 margin.

In the fifth round, Lara corner told him, start fighting but Malignaggi continued to out punch his opponent, who was left throwing one single shot at a time 튀어 나와요 동물 의 숲 다운로드. This continued for the rest of the fight as Malignaggi simply hit Lora when he wanted to and rarely got hit back. One example of this was in the eighth round when Lora was posing with his right hand and looking to pull the trigger; Malignaggi nailed him with four punch combination. This led to an easy decision for Malignaggi.

In the second bout, former champion Kendall Holt faced undefeated Danny Garcia in a battle of junior welterweights for the WBO version of the title 라이브 7화 다운로드. Holt used his jab in the opening two rounds to set up his right as Garcia looked tentative as he threw weak punches.

As the fight progressed, Garcia started to put rounds in the bank as he was outhustling Holt, who began to press the issue out of desperation. His corner told him in the tenth round that he had to win their all of the remaining rounds to have a shot of winning and while Holt gets a few licks, the bigger punches come from Garcia including a tenth round ending left hook 다운로드.

Garcia stayed ahead of Holt by throwing punches in bunches while Holt was looking for the one punch to end it. He didn’t find it as Garcia managed to jab and hooks to Holt to end the fight and win an split decisions. One judge had Holt a winner by a close 115-113 but the other two judges had it an easy Garcia win with Garcia winning nine rounds, 117-111.

Antonio DeMarco challenged Jorge Linares for the vacant WBC lightweight title in the fight that should have been the main event 다운로드. For the first four rounds, Linares hand speed and mobility dominated the fight. In the sixth and seventh round, DeMarco managed to connect on some solid shots and slowly changed the fight. DeMarco punches cut Linares’s nose and blood started to flow.

In rounds eight thru the ten, DeMarco continued to stalk his opponent but Linares connected with more solid shots as he won those rounds 신구미호 다운로드. DeMarco was far down on points going into the eleventh round but he nailed Linares with solid rights that hurt. Linares fought back and both fighters went toe to toe in a battle of desperation. With a minute left, a DeMarco left stunned Linares and from that point, he chased his opponent down as Linares retreated and trying to avoid the onslaught 엘소드 핵 다운로드. A final flurry by DeMarco forced Linares into the rope as the referee stopped the fight.

If the fans loved the DeMarco-Linares fight, they had to hate the end of the Hopkins-Dawson fight. In a fight that resembled a street brawl more than the sweet science, the ending reflected the first five minutes plus at the point. The final act of the bout could easily been called a no-contest since the final blows were the results of Dawson throwing Hopkins off him after Hopkins essentially jumped on him after a right missed. Replays showed that Hopkins fell on his elbow, leading to a separated shoulder and it would have been difficult for Hopkins to have continued. Bottom line, it was an ugly fight that ended ugly. For fans, another PPV ended in a fiasco. Just like Mayweather-Ortiz, this bout ended in more confusion and nothing was concluded.

For Dawson, the next fight is Pascal and as for Hopkins, much will depend upon his recovery from the shoulder before we know what is in his future. Look for Hopkins to come back and angle for a rematch. The big fight was DeMarco-Linares as DeMarco refused to give up despite being out punched and that resolve produced a knockout and a title.