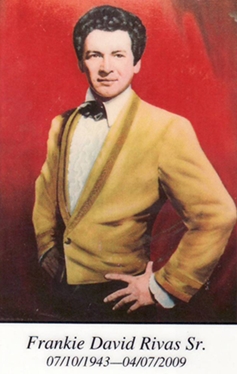 By David Martinez As the month of April now comes around … besides taxes being on my mind … there is something else more important to me 유료 폰트 다운로드.  On April 7, 2009, Frankie Rivas peacefully passed away. I have many friends in life, but Frankie Rivas was the one that stood out because of his genuine love and care for people 드빌 버그 판 apk 다운로드. Each time I would see him, I didn’t get a hand shake, a pat on the back, or a high five – I got a true genuine hug! A lot of people think that I met Frankie through boxing, which is a good guess, but I actually first met Frankie when I was a young boy in 1962 다운로드. He was a waiter at a local Santa Barbara downtown restaurant called Leon’s. My parents would go there and Frankie was usually our waiter, with a happy face to greet you 다운로드. I will always remember one of the early times going there for dinner; after he took our food order he asked me “What can I bring you, David?” Before I could say “A soda pop would be great,” he said “A ‘Shirley Temple’ is what I will bring you.” At that stage of my life I had no idea what a ‘Shirley Temple’ was and I thought this man was going to bring me a little toy doll 콰이용 모바일 다운로드. So, he introduced me to what was actually 7-Up and grenadine with a cherry! There are so many little stories that I have of Frankie, and I will treasure them all forever 코드 블럭 다운로드. But it was boxing that bonded Frankie and me through my almost fifty years of knowing him, and Frankie was truly a mentor to me with his wisdom of the sport 커런시캅 다운로드. Frankie boxed as a successful amateur in his youth and throughout his life he and I attended many boxing shows and events together. He also made the time to offer his expertise to everyone, and was involved helping kids as an advisor, referee, and judge in many youth programs throughout the community 다운로드. To a man that was my friend – my best friend – please join me in prayer in memory of …  Frankie Rivas.

2 thoughts on “IN MEMORY OF: Frankie Rivas”