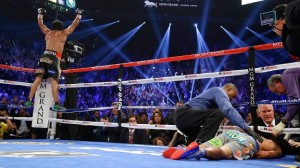 For the first two rounds of fight number four, Pacquiao held a slight lead but in the third round, Marquez finally did what he couldn’t do for three fights; send Pacquiao down to the canvas 다운로드. Marquez landed one big shot after another but it was his right that sent the Pacman down.

In the fifth round, Manny Pacquiao connected on a straight left at the beginning of the round but Marquez managed to land a body shots and his jab. Pacquiao landed a straight left that sent Marquez down. While it wasn’t a hard knockdown as Marquez glove hit the canvas and from there, they landed big shots against each other 다운로드. Pacquiao appeared to have the momentum as he stunned Marquez over the last minute and while both landed bombs, it was Pacquiao that had Marquez in retreat. Pacquiao trapped Marquez in the corner as the bell sounded to end the fifth. It looked like Pacquiao began to have the fight in hand.

The sixth round began with a right hook landing by Pacquiao but Marquez snap his jabs in retaliation wpf toolkit. Pacquiao landed two big left hands; forcing a Marquez flurry in response. Both men landed bombs as they did in the previous rounds. Pacquiao flurried over the last twenty seconds with the idea of sealing the round in his favor but a Marquez right sent Pacquiao down to the canvas face first and out cold. As the bell ranged, Pacquiao was sprawled out on the floor, done for the night.

Marquez finally got the better of Pacquiao and this time, it was not left in the hands of the judges. Marquez right hand, which was his most effective weapon in this series, ended this fight. The ramification of this fight was huge in the world of boxing.

The first is that this ends any hope of a Mayweather-Pacquiao fight and the blame here lies with Bob Arum, who risked it all for a few millions more dollars. Arum wanted to keep his cash cow and hopefully milk it but Pacquiao finally showed that maybe all of those past wars paid a price.

While Marquez was the older fighter chronologically but in ring years, it may have been Pacquiao who was the older fighter. In his bout with Bradley, Pacquiao showed sign of aging as he did not put the kind of pressure on Bradley as he did with past fighter. While I felt he won, the judges disagreed but his failure to unleashed pressure every second of the Bradley fight cost him and it may have shown that maybe, the end game was near.

Arum cost his fighter millions upon millions that a Mayweather’s fight would bring in. Arum had three choices. Fight Marquez and take a chance that his fighter could lose to a fighter who showed he had what it took to win. This proved deadly to Pacquiao’s earning power. The second choice was to fight Bradley again, a fight that favored Manny Pacquiao, or third, simply fight Mayweather. The latter would have been the biggest grossing match, but alas, all we have is what could have been.

Now Mayweather has to look elsewhere for his next bout and that most likely will be either Bradley or Robert Guerrero but no Pacman. As for Pacquiao, he had many outside interest including being a Philippine politician. The hunger was no longer there whereas Marquez had one more chance to vindicate his own accomplishment in the ring while revenging what he thought was bad decisions in his last three bouts with Pacquiao.

Marquez showed that he is one of the great fighters of his generation and his career as an elite fighter lasted longer than either of his fellow Mexican greats, Marco Antonia Barrera or Erik Morales. This past Saturday, he showed why he is a Hall of Fame boxer. Pacquiao is no longer the main man in the welterweight division and this was a case of fighting one too many fights when he had a big pay day left with Mayweather. For Marquez, revenge for all of those past close decisions was his as he beat Pacquiao decisively. Arum had three choices; fight Marquez and take a chance of losing an ever big payday with Mayweather.

The second choice was a rematch with Bradley, which was the safer fighter with a style more to Pacquiao liking but Arum didn’t like the PPV potential and the final choice was fight Mayweather and get the biggest payday for his client. He chose door number one and thus close door number three permanently.

Boxing could have a big payday but Arum refusal to allow Pacquiao a shot a Mayweather a couple of years ago cost him and his figher hundreds of millions dollars. Marquez got his big payday and his revenge. Thank you Bob Arum. (My view on Arum are shared by others including ESPN Ted Atlas. I will add that Arum forgo Bradley in favor of Marquez because of a few extra PPV ad buy and now we saw how the whole strategy came crashing down. As for Mayweather, he is a loser as well since he will be denied his biggest payday. While some view Mayweather as the main reason this fight didn’t come off; I suspect that he was ready to deal a year ago and his demands for drug testing were not unreasonable.)