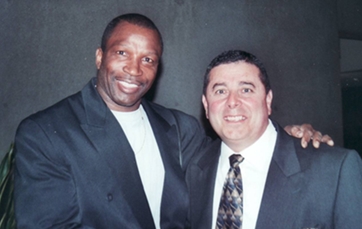 If I was to tell you there was once a heavyweight who lost his first professional fight by knockout. Also this heavyweight would actually lose half of his first dozen fights. If I told you he would go on to win a piece of the heavyweight crown and be a major player in the division for well over a decade. Would you believe me ?

Well this is a true Cinderella story. It is the career of former WBA heavyweight titleholder Mike “Hercules” Weaver. Who in my opinion for nearly a five year period he was the second best heavyweight in the world.

Mike turned pro in 1972 and he was matched tough from the very beginning 다운로드. He lost his debut by knockout to future contender Howard “Kayo” Smith. He would then lose a five round decision to Smith in a rematch. Undefeated Billy Ryan would halt him in two rounds and four fights later unbeaten Larry Frazier would stop Mike in the second. In 1974 Weaver would drop a ten round duke to the much bigger Rodney Bobick. Then Mike would be taken out in seven by the streaking Olympian prospect Duane Bobick.

At this point the future of Mike Weaver looked very bleak. Over the next three and a half years though Weaver would put together a fairly impressive eight fight win streak. Among his victims were Tony Doyle,Jody Ballard,Dwain Bonds and hard hitting Pedro Lovell. This put Mike into a fight with the talented Stan Ward for the California heavyweight title 다운로드. Ward outweighed Weaver by forty pounds and took a twelve round verdict. Seven months later Weaver was matched with Big Leroy Jones for the vacant North American Boxing Federation heavyweight title. Jones outweighed Mike by a whopping sixty six pounds ! Jones boxed his way to a twelve round decision over Weaver to capture the crown.

The determined Weaver with resurge his career by reeling off five straight wins in impressive fashion. He took out the very dangerous Bernardo Mercado in five rounds. He then met Stan Ward in a rematch. The vacant United States Boxing Association heavyweight title was on the line. This time Mike took care of Ward in the ninth round and put himself in a position for a shot at the world’s heavyweight title.

On January 22,1979 Weaver met World Boxing Council heavyweight titleholder Larry Holmes at New York’s Madison Square Garden 다운로드. Although Larry only held a piece of the title he was widely regarded as the world’s best heavyweight. Holmes brought in a glossy but well earned 30-0 record into the Garden that night to meet the decided underdog Mike Weaver. Oh what a fight it was !

The superb Holmes jab would set the early pace but at times Weaver would surprise Larry with a good jab of his own. Someone must have forgotten to tell Weaver he was a big underdog because he sure was not fighting like one. As the bout progessed Mike started to carry the fight to Holmes. On several occasions Weaver would rock Larry with powerful lefts to the head and body. These were hurtful punches by the challenger but the ever proud Holmes kept keeping the pace. Still the crowd was starting sense an upset may be in the making 다운로드. After ten well contested and brutal rounds,Holmes was ahead on the cards. Nevertheless he looked the worse for wear as Weaver seemed to be coming on. Then came the pivotal eleventh round. Weaver was going like gangbusters now and he was really working Larry over. The game champion was winging back but he looked hurt and drained as his title seemed to be slipping away. Toward the end of the round Weaver was hammering Holmes in a corner. Then out of nowhere Larry landed a huge uppercut that sent Weaver down against the ropes. It was obvious that Mike was badly shaken as he barely pulled himself up by the ropes.Holmes followed up quickly but time ran out. As the fighters came out for round twelve it was plain to see that Weaver was still on queer street 다운로드. Holmes jumped all over him and soon the referee was forced to halt the fight. Larry had won the war but Weaver had won the fans.

Mike Weaver was now a proven commodity. Later in 1979 Mike would win a one sided decision over rugged Scott LeDoux. Next up for Weaver,a shot at World Boxing Association titleholder Big John Tate. Many experts were saying Tate was the future of the heavyweight division. Big John had destroyed Bernardo Mercado,Duane Bobick and Kallie Knoetze to build a 22-0 record. He then won a convincing decision over Gerrie Coetzee to win the WBA title vacated by Muhammad Ali. Now there was talk of Ali coming back to fight Tate 다운로드. There was talk of a unification fight between Tate and Larry Holmes. The future looked very bright indeed for John Tate. The Weaver bout would just be a chance for John to showcase his talents in the friendly confines of Knoxville,Tennessee.

The bout itself pretty much went according to plan. At 6″4″ and 232 pounds,Tate was a very smooth boxer for a big man. Weaver seemed somewhat lethargic in the early going and Tate built up a substantial lead. It wasn’t until around the twelfth round that Weaver stirred himself and began to open up. At one point he rocked Tate down to his toes but John hung in there. You could see Tate was fading but it still looked like he would be able to stall until the final bell and get the much deserved decision. The clock was ticking in round fifteen and with around a minute left in the fight,Weaver had Tate on the ropes 셋 셀테니 다운로드. Mike then landed a shot to Tate’s head that landed with such force that John was out before he hit the canvas. As Tate laid in a motionless heap, Mike Weaver was crowned a world champion. Poor Tate was never the same after this fight. He would be knocked out by Trevor Berbick in his next fight and then fade from contender status.

Weaver’s first defense would be in South Africa against native son Gerrie Coetzee. The experts gave the hard punching Coetzee a good chance of bringing the crown to South Africa. The bout itself was an action packed contest. Each fighter landed their share of heavy punches. Weaver was landing well with powerful left hooks to the body. These seemed to be breaking Coetzee down. Weaver was slightly ahead on points when he halted Coetzee in round thirteen Download Food Additives Orbit.

Weaver’s next defense would be against unbeaten (20-0) James “Quick” Tillis. It was a dreary fifteen round affair that saw Tillis take few chances. Weaver retained his title with a convincing decision. Next for Mike would be undefeated (24-0-1) Michael Dokes at Caesar’s Palace in Las Vegas. The bout had hardly started when Dokes stunned Weaver and sent him to the ropes. Dokes was quickly on Weaver trying to follow up. Weaver was trying to defend himself when referee Joey Curtis jumped in and stopped the fight ! Only one minute and three seconds had elapsed and now Mike Weaver was an ex-champion. It was a very controversial ending and a rematch was scheduled. The second meeting took place five months later. It was a solid action fight with both boxers dishing out their fair share of punishment 프로젝트 좀 보이드 다운로드. I felt Weaver came on down the stretch to do enough to regain his title His bodywork was excellent as he gave Dokes quite a rib roasting. Two judges scored the fight a draw. The other judge had Dokes four points ahead. Dokes retained his title with a draw. To this day I still feel Mike Weaver won that fight.

Weaver would solidify his status as a top contender again stopping Stan Ward in their rubber match. Then almost two years after his draw with Dokes,Weaver was set to meet WBC champion Pinklon Thomas. This was a good scrap while it lasted. Thomas had a great jab but at times Weaver was out jabbing him. Mike was also landing some heavy body shots. Although Weaver had suffered a brief knockdown in the first round he had battled back and the bout was almost dead even after seven rounds 용과같이 pc 다운로드. In the eighth round Weaver’s chin betrayed him as Thomas knocked him out to retain his title.

From this point on the career of Mike Weaver became a roller coaster. He scored a second round kayo over highly regarded Carl “The Truth” Williams. Then in turn he was taken out in one round by James “Bonecrusher” Smith. Next Mike would lose a split decision to Donovan “Razor” Ruddock. Fifteen months later Weaver would return to South Africa and upset Johnny DuPlooy in seven rounds. Five months later Weaver would return again but this time DuPlooy took him out in the second.

In April of 1990 Mike would lose a lopsided decision in a rematch with “Bonecrusher” Smith.Over a year later he was belted out in six rounds by an up and coming Lennox Lewis. The loss to Lewis pretty much finished Weaver as a serious contender. In 1993 he was on the big fight card in China and won a hard fought ten round decision over Bert Cooper. Mike won his next five fights over mediocre competition. In 1998 weighing in at 244 pounds he was halted by Melvin Foster in nine rounds.

Over two years later in his last hurrah,Weaver got his rematch with Larry Holmes. This time Larry was the boss as he stopped Weaver in round six. It was Mike’s last fight. Weaver retired after sixty pro fights with a record of 41-18-1. He scored 28 knockouts and was stopped 12 times. Sometimes records are deceiving. From Weaver’s 1974 loss to Duane Bobick up to his 1985 title fight with Pinklon Thomas,Mike had a 21-4-1 record. Mike met seven world champions and five others who fought for the titles.