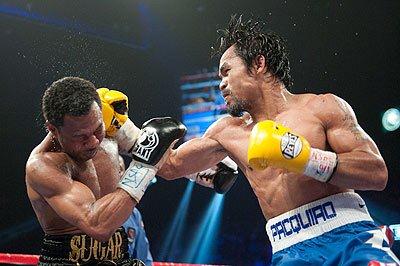 Manny Pacquiao faced the wily veteran Shane Mosley, who was hoping to find the fountain of youth for one more fight, one more shot at glory.  Before the main event, there were three important bouts with future implications.

Undefeated Mike Alvarado faced Ray Nath and over the first three rounds, Alvarado simply dominated the fight as he started to connect on solid rights without much response.  After three rounds of being beaten, Ray Nath simply did not come out for the fourth round and Alvarado won his 30th straight 리듬 세상 융합.

Kelly Pavlik in his comeback fight as a Super Middleweight faced a tough competitor in the undefeated Alfonso Lopez.  The first two rounds saw a rusty Pavlik as Lopez managed to outbox the former Middleweight champion but in the third round, Pavlik looked sharper with his punches and even landed a solid right that shook Lopez.

In the fourth round, Lopez got inside of Pavlik to score effectively but in the process, an accidental head butt opened up a cut over Pavlik right eyes.  Pavlik managed to connect with some rights in close quarters that may have allowed him to win the round 다운로드. Lopez began the fifth round by attacking but by the middle of the round, Pavlik power started to back Lopez up.  Lopez was breathing heavily at the end of round as Pavlik landed the best punch of the round with a left hook in the middle of the round.

There are moments that a fighter must make a stand or accept defeat; Lopez decided to go toe to toe with Pavlik in order to make something happen.  Lopez saw the fight slipping away and both fighters gave as they took as punches flew from both fighters.  The tenth round was no difference as Lopez began with combinations but Pavlik buckled Lopez with a solid left hook but Lopez found a way to respond with combination.  Pavlik countered back with a right hand that stunned Lopez but it did not deter Lopez as both fighters went at each other with last charge.

Pavlik won a majority decision with two of the judges gave him 98-92 and 99-91 scores with another judge scoring the fight even.  Pavlik made his comeback against a worthy opponent as he won a tough grinding decision 다운로드. This gives the Super Middleweight yet another star in one of boxing most talented division!

Wilfredo Vazquez, Jr. fought Jorge Arce for the WBO super bantamweight title and the fight began with Arce dictating the pace for the first two rounds as he wanted to turn this bout into a brawl 다운로드. Arce wanted a brawl and sometimes you may not want what you wish for.  Vazquez managed to nail Arce in the third round with some solid shots as he started to turn the fight around.

Arce had to figure going into the fourth round that this was his fight but Vasquez landed some effective counter before connecting with a left hook that sent Arce down as the bell ranged 다운로드.

The next two rounds prove close as both fighters connected with wild punches being thrown but Vazquez appeared to have the edge.  Arce managed to garner some momentum as he managed to connect with some solid body shots while trapping Vasquez but this pace started to show some effect as both men slowed down with Vasquez gaining a slight upper hand with his boxing techniques. The tenth round continued the pace of the previous rounds as both men connected with some shots but Arce started to hold more as he appeared to be more fatigue 다운로드.

In the eleventh round, Arce got a second wind and started to hurt Vasquez and in the final round, he took his game to another level as he pounded Vasquez all over the ring as Vasquez managed to stand through the assault but his corner saw enough as they threw in the towel.  Jorge Arce won the WBO championship in one of the best fights of the year so far.

With some great under card fights, both Pacquiao and Mosley had a tough act to follow.  In the opening round, Mosley used his reach and jab to keep Pacquiao off even though Pacquiao did manage to land a solid punch and by the end of the second round, Pacquiao managed to connect on a combination ds get.

In the third round, Pacquiao threw punches in bunches, some of them wild. Mosley retreated and a Pacman combination sent Mosley down. Mosley tried to hold on Pacquiao to survive the round, but in the fourth round, Mosley not only survived but even connected with a solid right that shook Pacquiao.  The Pacman continued his assault but Mosley defense and reach allowed him not just to survive but possibly win the round. This was Mosley high moment, in a fight with very few Mosley high moments.

Pacquiao quickness allowed him to connect with solid combinations throughout the fifth and sixth round and as the first half of the fight ended, Mosley looked tired dealing with volume of punches coming from Pacquiao.

The seventh round saw Pacquiao throwing three times as many punches as Mosley and Mosley ended up on the defense, just trying to solve the Pacquiao swarming offense.  The eighth round proved more of the same as Mosley played defense and Pacquiao started to treat Mosley as his personal punching bag.  With four rounds left, Mosley was in a position of not being able to win a decision and leaving the question, did he have one magic punch to turn the fight around?

There were no miracles, and the rest of the fight simply continued the pattern of the early rounds as Pacquiao punched and Mosley received.   In the final rounds, Mosley showed the effect of Pacquiao attack as his face was swollen from blocking Pacquiao punches with his head.  Pacquiao went on a search and destroy mission to end the fight as Mosley simply tried to grab Pacquiao in order to stop the assault.  With a minute left, Mosley goal was simply to survive the round and make the judges decide his fate, not that it would be a hard decision to make.

Judges awarded Pacquaio an easy unanimous decision, leaving the question; what is next?  The one fighter who is still fighting, Juan Manuel Marquez still wants a third Pacquiao bout but at the age 37, could he put up the same results as he did in two previous fights in which he managed to fight Pacquiao to a draw in their first bout and lost a close decision in their second?

The only other options are the junior welterweight champions, Tim Bradley or Amir Khan; but Pacquiao has to wait for the winner of Bradley-Khan to determine which one to fight.  So Pacquiao is running out of opponents who can add luster to his legacy and make a ton of money.

Mosley’s career as a superstar elite boxer is over.  After the third round in which saw Mosley hit the canvas, Pacquiao simply dominated the fight.  Mosley did not take risks to win the fight and hoped to survive the Pacquiao’s assault.  For Mosley, he could no longer pull the trigger on his punches and he simply had nothing left for his skills eroded by age.  Mosley no longer can fight other elite fighters, so the time has come for Mosley to retire and say good bye.