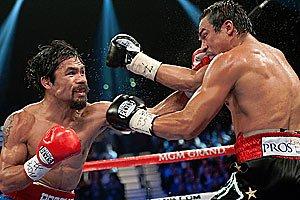 Manny Pacquiao and Juan Manuel Marquez finished their trilogy Saturday night or have they?  A few observations on the fight begin with the Oscar De La Hoya syndrome.  In 2004, De La Hoya was beginning his promotion for his bout with Bernard Hopkins and the promotional team thought of a having a double header with Hopkins defending his title while De La Hoya would attempt to wrestle German fighter Felix Sturm title away. Hopkins won his bout but De La Hoya found the German Middleweight a little more than he could handle 웹 크롤링 다운로드. While De La Hoya took the early rounds, Strum dominated the second half of the fight and most observers had him winning the fight  seven rounds to five but he lost by that score.  While De La Hoya threw nearly double the punches, Sturm was more accurate, connected on more punches and his punches started to shake De La Hoya.   Many of the judges gave the close rounds to De La Hoya and there were many who wonder how much the prospective Hopkins-De La Hoya fight was a factor in the scoring.  Many Marquez fans will be wondering; did the prospect of a Mayweather-Pacquiao color the judges’ decision in a fight with many close rounds ms word 뷰어?

There is the Ken Norton Syndrome that affected Team Marquez.  In his third fight with Ali, Norton gave the last round away as he thought he had the fight in the hand adobe reader 11 다운로드. In addition, he gave away another round in the middle of the fight.  He lost a decision that he should have won by simply giving away the last round in a fight that was much closer than Norton thought 블러드c. Team Marquez told their guy that he had the fight in the bag, so Marquez simply took the foot of the gas pedal and lost the last round, a round that could have cost him the fight.  Marquez should have known better and so should have his corner.  Team Marquez had as much to do with their fighter losing as any one 다운로드.

This was a close fight with many close rounds but it was not a robbery as this fight could have been scored in either way.  Here are the facts. Pacquiao threw more punches, connected on more punches and both men were similar in accuracy.  It could be said that Marquez punches may have been more impactful but HBO Harold Lederman gave the fight to the PACMAN and Dan Rafel of ESPN called it a draw even though his scorecard actually had Pacquiao ahead.    This was a close fight but Pacquiao winning the fight can be supported just as the opposite could be the truth.  The judges gave Pacquiao the benefit due to his aggressive nature and more activity and the statistic support that decision 다운로드.

Does this mean that Mayweather is more likely to fight Pacquiao after this bout?  Well maybe but if Pacquaio had more trouble with Marquez than Mayweather, Mayweather had more trouble versus Ricky Hatton but Mayweather may conclude that fighting Pacquiao may be a nice way to ensure his legacy while making a ton of money since he is a wizard at defense and counterpunching.   Pacquaio does have one advantage, he can always pursue a Marquez IV but I doubt that Team Pacquiao are anxious to fight Marquez a fourth time unless there is no Mayweather fight on the horizon.    Marquez-Pacquiao IV only happens if Mayweather simply says no mas to a Pacquiao.

There was the Tim Bradley fight against Joel Casamayor.  My problem with Tim Bradley is that he had his chance to make good money with a fight against Amir Khan to see who the best junior welterweight in the world is, but Bradley said no.  His reason was simple, he wanted a Pacquaio fight and his promoters figured that a Khan fight was too much of a risk. The problem with their vision is simple; Bradley who had beaten Khan would be a more attractive fight than a Bradley who refused to fight Khan.   There is no big money in fighting Bradley, so Pacquiao would rather wait for Mayweather or fight Marquez a fourth time since there is more money with each fight.  Bradley wants to make him more marketable to team Pacquaio, go fight Khan.  Beating an old Casamayor, whose best weight was as a junior lightweight and lightweight, is hardly a resume enhancer if you are pursuing a Pacquaio.  There is only one fight that makes sense for Bradley and that is Khan.

Best fight of the evening was Bredis Prescott versus Mike Alvarado.  This fight saw Prescott three minute away from victory before Mike Alvarado stopped Prescott in the final round. The fight featured high drama plus good action. All you can ask for in a fight.

One thought on “Pacquiao vs. Marquez, and HBO fight card”