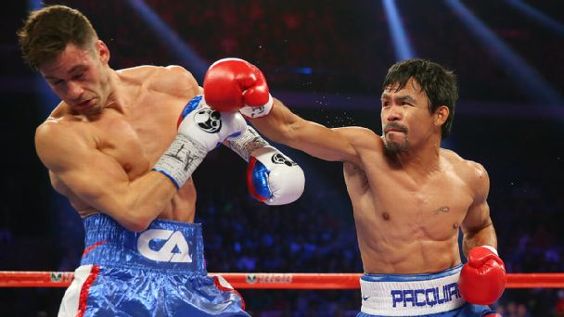 It was self-evident that Pacquiao was the better fighter than Chris Algieri, who showed the same great chin he displayed against Ruslan Provodnikov, when he survived two knockdowns in the first round and a swollen shuteye.  Algieri advantage was supposed to his jab, the same jab that saved him against Provodnikov but in this battle,  Pacquiao neutralized this jab with his quickness and power bullet force 다운로드.

By the fourth round, Pacquiao experience in big events showed up as he started to attack the body to go with head shots and Algieri at this point was down by four points with a 10-8 round in the second round due to a flash knockdown.   Aligieri showed some life in the fifth round with late shots including the rights down the stretch of the round but this brief revival ended in the next round.   Pacquiao picked up the pace as he decided to be Hall of Fame fighter he is as he sent Algieri down with a straight left at the halfway point of the round.  He followed this up thirty seconds later with another left sending Algieri down a second time in the round.  Algieri showed resilience but resilience don’t win fight when you are the one getting hit 다운로드.

Pacquiao continued to pound Algieri over the next two round and in the ninth round, Pacquiao again sent Algieri to the canvas with yet another hard left and Algieri got back up only to have referee hit him with standing eight count from another left

Throughout the tenth round, Pacquiao tried to end the fight and with twenty seconds left, Pacquiao sent Algieri down for a sixth time but Algieri found the strength to get up.  Pacquiao wanted that knockout victory but Algieri showed toughness that denied him that cars 다운로드.

Algieri survived the final sixth minutes as Pacquiao nailed Algieri with a right that should have sent him down but Algieri stayed standing despite the veracity of the shot.   Algieri flashed a quick rally at the beginning of the twelfth but this brief rally died quickly as Pacquiao simply put the heat back on Algieri survived and now has one lost on his record pc용 카카오톡.

So what could be said about this fight?  Pacquiao was easily the better fighter and Algieri showed guts and courage to withstand the beating but he showed that he was not yet a true contender 다운로드. History will show if he had his fight of his life against Provodnikov or there is room to grow.  Algieri doesn’t have a big punch and his jab was ineffectual against a half of fame fighter.  It could easily be argued that the referee could have stopped the fight 해리포터와 죽음의 성물 2 다운로드.

Pacquiao looked the best he has in years but how much is that due to the competition?  His easy victory did do one thing, he gave Mayweather a reason to fight him.  Pacman needed to look good and he did 다운로드. Both Pacman and Mayweather need each other for that one big pay day.  If both men want that million plus PPV buy then they have to fight each other.  Maybe the fight that we have been promised for years will actually happen 다운로드?