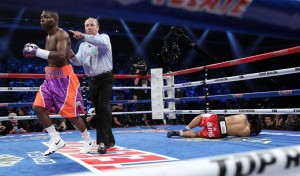 In the opening round, Looknongyantoy was shaken by a unintentional head butt and went down. As action resumed, Rigondeaux immediately applied pressure and landed a combination that dropped the challenger, as referee Mark Nelson stopped it at the 1:44 mark of the bout 보이스3 7회.

I have contended that Rigondeaux is one of the best “pound for pound” fighters today, and after last year’s huge wins over Joseph Agbeko and Nonito Donaire – who can argue that 다운로드?

Big “future” bouts that are out there (in order) for Rigondeaux are: Leo Santa Cruz, Kiko Martinez, Carl Frampton, Scott Quigg, or a rematch with Donaire (who has since moved up to featherweight) is a possibility … all of a sudden the 122 pound weight division of boxing has lit up!