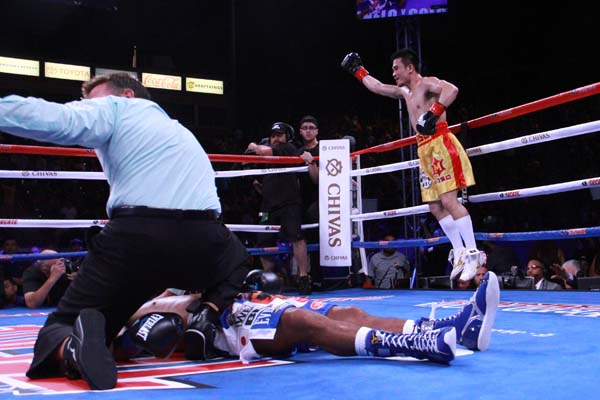 On Saturday night September 9, 2017 was a great night of boxing that featured three outstanding super flyweight bouts at the StubHub Center in Carson, California 몽환신사.

The evening was headlined by WBC super flyweight champion Srisaket Sor Rungvisai (44-4-1 / 40 by KO) who retained his title with a one-sided knockout win over Roman “Chocolatito” Gonzalez (46-2 / 38 by KO) 다운로드.

Round one was the typical feel out round, but it was evident from the start that Gonzalez was hesitant and appeared not to be himself 멜론 2019년 7월.

In round two the action picked up a bit with Rungvisai pressing forward and taking the fight to Gonzalez.

Round three it was clear that Rungvisai was the stronger of the two and clearly won that round as he had the previous two rounds.

In round four Gonzalez took a vicious right hook by the Thai southpaw champion and he went down.  Gonzalez got up after the count, but was caught again with the same right hand and got knocked out cold that ended the fight – the time officially was 1:18 of round four.

I personally thought that Gonzalez won their first fight in March 2017, but in this rematch it was very clear who the better fighter was, as Gonzalez suffered his second consecutive professional defeat.

In was two of the best super flyweights with the winner to be the #1 contender to face the winner of Rungvisai vs. Gonzalez for the WBC 115 pound title.

The fight opened up with Cudras at his best pressing the action with excellent combinations and the quicker movement while Estarda was content to wait patiently for openings to counter.

Round three they traded big power punches, with Cudras seeming to land more.

In round five Estrada picked up the pace with effective countering becoming the aggressor and closely winning those mid-rounds.

In round nine Cudras landed some nice shots snapping Estrada’s head with right hand shots and simply out working Estrada to make the fight close to that point going into the 10th round.

In round ten Estrada threw a beautiful right hand that dropped Curdras.  From that point Estrada inserted himself to be the better fighter down the stretch into the championship rounds, but slightly losing the final round on my card.

I personally had the fight even in rounds at six apiece, but it was the knockdown that made that round a 10-8 and that would be the difference in the scoring at 114-113.  All three judges had the same score 114-113 for the winner Estrada.  HBO’s Harold Lederman had it just reversed 114-113 for Cudras, 7 to 5 in rounds.

In the third super flyweight fight of the night WBO super flyweight champion Naoya Inoue (14-0 / 12 by KO) made his United States debut with a dominating knockout win over Antonio Nieves (17-2-2 / 9 by KO).

Inoue controlled every round of the fight and threw hard punishing left hooks to the body all night.

Nieves was mainly on the defense in the this bout and in round five he got dropped with a huge body shot, which was the beginning of the end.

After six rounds and before round seven would begin, the corner of Nieves told the referee that their fighter had enough and the fight was waved off.

Inoue is a fighter to be reckon with in a loaded super flyweight division and this fight was his sixth defense of his title belt.