Crawford fought in the southpaw stance throughout the contest and was absolutely the better fighter, dropping Postol twice in round five and seriously hurt Postol in round nine 다운로드.

The fight was simply a great fighter vs. a good fighter in this much anticipated match between two unbeaten fighters each in their prime 영화 크리스마스 캐롤 다운로드.

The undercard featured Mexican sensation Oscar Valdez (21-0 / 18 by KO) knocking out previously unbeaten Matias Rueda (26-1 / 23 by KO) in the second round to win the vacant WBO featherweight title.

Valdez was sharp from the start, staggering Rueda in round one. Valdez continued his attack in round two and dropped Rueda twice with body shots. The time was 2:18, and Valdez was nothing less than sensational. 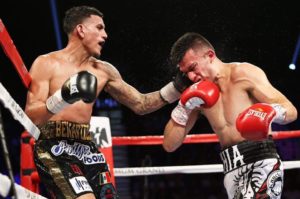 My card had Benavidez easily winning rounds one and two, connecting with his sharp shooting jab, as Santana kept coming forward. Then Santana came on with his aggressive attacking pinning Benavidez consistently on the ropes with effect body shots, winning rounds three, four and five. Santana slightly loses round six and this brawl is now even – three rounds a piece – anybody’s fight. Santana fought tough and hard in those three rounds and narrowly wins round seven but as the fight closed out, Benavidez wins the final three rounds to close the show.