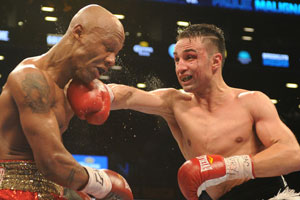 The battle of Brooklyn between Paul Malignaggi and Zab Judah was less a battle than a skirmish 핀터레스트 이미지 다운로드. The bout pattern was settle in the first round and essentially stayed that way throughout the fight with very few exceptions.  Paul “the magic man” Malignaggi simply out boxed and out hustle Judah, who appeared unable to pull the trigger throughout the bout with one exception in which a left hand sent Malignaggi down for a brief knockdown that was more of flash knockdown than a damaging blow.    Malignaggi unleashed his jab which kept Judah unbalanced and confuse throughout the bout.  Malignaggi added body shots to go with lightning quick combinations.  Judah never seemed to have an answer for Malignaggi attacks nor did he ever seem willing to take risks but wait for one punch, the punch that never came 다운로드. Even his knockdown was as much to do with feet tangling as it was with power.
If Judah never seemed to get off, Malignaggi fought one of his best fights in years as he simply dominated almost every round as he stayed relevant in the Welterweight division.   As for Judah, he is 36 and after fighting over 300 plus rounds in a career against some of the best; he may no longer have the skills of an elite fighter.  Another fight or two and we will know if Judah is an old 36 or capable of a few more fights at a higher level 의지의 승리 다운로드.
Austin Trout found himself in a bout that didn’t fit his style as he faced the slick boxing Erislandy Lara. Lara simply out boxed Trout who attempted to change from being a boxer to being the aggressor.  It was a failure as Lara simply pot shot Trout when Trout attacked.  Trout never cut off the ring and in the eleventh round, he got nailed with a straight left that nearly ended the fight.  Trout got back up but he wobbled back to his corner and managed to survive the final round.  Trout is a good boxer but this bout saw him up against another boxer who used his skills to his advantage. As for Lara, he may have put himself in line for a bout with Saul Alvarez and he might just have the right style to hand Alvarez his second defeat.
Shawn Porter became the 50th fighter who fought on Showtime SHOBOX Next Generation who won a championship as he won a close fight against Devon Alexander.  Over the first three rounds, Porter was sharp with solid rights and left hooks but by the fifth round, Alexander got back into the fight as he managed to land solid combinations of his own. By the time fight ended, both fighters were similar in punches thrown and connected but this was a fight fought on Porter terms.
In the evening closet fight, Sakio Bika and Anthony Dirrell fought to a draw. Like the Porter-Alexander fight, Dirrell started fast and that included knocking Bika down but Bika successfully pounded Dirrell body and often forced Dirrell to the rope.  While Dirrell landed solid shots throughout the bout and there were at least three occasions, he even stunned Bika, but Bika continued to pound away throughout the second half of the bout.
The fight was considered a draw with one judge giving the fight to Dirrell, another to Bika with a third calling it a draw. That sums up the fight with Dirrell being the more accurate puncher but Bika the more active. Barclay Center in Brooklyn is challenging Madison Square Garden as the New York Mecca of boxing as since the Center was open, boxing has become a staple of the arena.