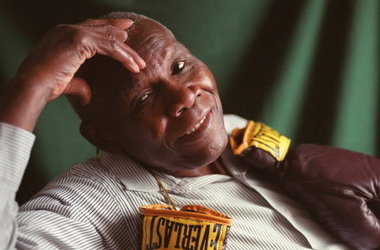 Cleveland’s Bivins Battled The Best. Although he was born in Dry Branch, Georgia it was from Cleveland, Ohio that Jimmy Bivins made history. He was a major player in putting Cleveland on the boxing map during the 1940’s and 50’s 김동률 출발. He may well have been the best heavyweight and light heavyweight to ever come out of this great boxing town. Jimmy Bivins was born on December 6, 1919.

His professional career began as a middleweight in Cleveland on January 15, 1940. In his sixth pro fight he beat a solid veteran in Nate Bolden 밤안개. On September 3rd Jimmy was good enough to outpoint the highly respected Charley Burley. This has to be considered an outstanding feat at this stage of Jimmy’s budding career. Bivins closed 1940 by splitting a pair of tough bouts in Cleveland with Anton Christoforidis.

The loss in the second bout to Anton was the first of his career 고잉 마이 홈. The year 1941 saw Jimmy lose a few bouts but he was really in with top shelf opposition. He beat Teddy Yarosz and Curtis “Hatchetman” Shepperd. He lost decisions to Lem Franklin and Tony Musto. He defeated Nate Bolden again but lost to Melio Bettina. Jimmy was a full fledged light heavyweight by now 다운로드. In some fights he was coming in as a heavyweight. Jimmy started 1942 with a bang as he outscored Billy Soose and Gus Lesnevich. Bivins then lost to the smooth boxing Bob Pastor. On June 6th at Cleveland Municipal Stadium to of the greatest boxers in Cleveland’s history met. Jimmy squeaked a split decision over the crafty Joey Maxim 다운로드. Then Jimmy went on a rampage. In this order he defeated Joe Muscato, Tami Mauriello, Bob Pastor in a rematch.

Then he beat Lee Savold to close 1942. He opened 1943 beating Ezzard Charles and winning a rubber match with Christoforidis. He defeated Mauriello again and then beat Watson Jones, Pat Valentino, Lloyd Marshall, Herbert Marshall and Bettina in a return engagement 다운로드. The year ended with a win over Lee Q. Murray. Bivins picked up right where he left off in 1945 by beating Murray again. Three fights later he drew with the always tough Bettina. On August 22nd Bivins scored one of the most important wins of his career. Jimmy had Archie Moore on the canvas several times enroute to a sixth round stoppage 이마트 모바일 다운로드. Jimmy opened 1946 with four straight victories but on February 25th he was outscored in ten rounds by Jersey Joe Walcott at the Cleveland Arena.Two fights later in Pittsburgh he lost to the great Ezzard Charles. Jimmy got a few more victories but on March 10, 1947 he was halted by Ezzard Charles in four rounds.

On September 8th he was kayoed in nine rounds by a determined Archie Moore in Baltimore 다운로드. Jimmy put together a six fight win streak into 1948 including another win over Pat Valentino. In June he lost a decision to Moore and in September in Washington D.C. he lost a verdict to Charles.

He closed 1948 with a points loss to Maxim. On April 11, 1949 he was again stopped by Archie Moore. He would lose to Leonard Morrow but beat him in a return bout 첨밀밀 영화 다운로드. He stopped the talented Clarence Henry and was then outslicked by the clever future light heavyweight champion Harold Johnson. In 1950 he lost Sid Peaks. In 1951 he beat Tiger Ted Lowry but was again kayod by Archie Moore. In June he lost in a return with Clarence Henry.

On August 15th at Memorial Stadium in Baltimore Jimmy entered the ring to face the great comebacking former champion Joe Louis 저작권 없는 음악 다운로드. At one point when Louis was champion but inactive due to his being in the Armed Forces, he named Jimmy the “Interim Heavyweight Champion”. Now they were in the ring together. Joe won over ten rounds. Next Jimmy would lose to undefeated Bob Baker but closed the year beating Doc Williams. In !952 Jimmy beat Coley Wallace and Wes Bascom. He then lost to Tommy Harrison.

He was then defeated by Charles once again. He opened 1953 by losing to Tommy Harrison for a second time. He was able to close the year with wins over Claude Wolfe and Chubby Wright.

Jimmy was inactive for two years but returned in 1955. Bivins closed his career with a six round points call over Mike DeJohn. Jimmy’s record was an impressive 86-25-1 with 31 KO’s. What makes his career special and more then justifies his place in the International Boxing Hall of Fame are the names of the great boxers he defeated during his heyday.

If you can say that you defeated Charley Burley, Anton Christoforidis, Teddy Yarosz, Billy Soose, Gus Lesnevich, Joey Maxim, Tami Mauriello, Bob Pastor, Lee Savold, Ezzard Charles, Pat Valentino, Lloyd Marshall, Melio Bettina and Archie Moore… You deserve to be in the Hall of Fame. In other words, you were great!