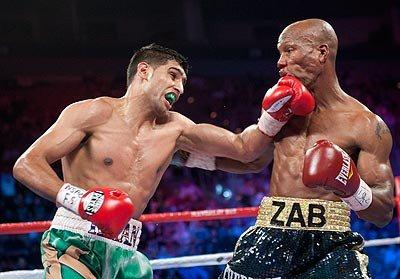 Zab Judah found himself with one more opportunity to win a big fight, this one from Amir Khan and become an elite fighter once again.  At the age of 33, Judah moved down in weight to the 140 pound division but Khan would be a big fight 시크릿 가든 대본 다운로드. As for Khan, he came into the fight as the younger and bigger fighter against an older but experienced boxer who has his share of big fights.  This fight happened because Tim Bradley chose not to fight Khan and Khan simply moved to the next best thing; Judah 다운로드.

Khan began the first round by jabbing and looking for openings whereas Judah showed patience as Khan early jabs missed.  Khan long jab kept Judah a safe distance and where Judah did managed a right hook from his southpaw stance; he did very little offensively 다운로드.

In the second round, Judah avoided many of Khan punches, but he did very little counter whereas Khan continued to control the real estate between his opponent.   By the third round, Khan physical feature started to take control but Judah managed to slip left hands but they had little effect on the bigger Khan 다운로드.

Khan lengthened his lead on the scorecard as he easily score with some excellent rights that were followed by jabs. As the fourth and fifth round progressed, Khan punches were getting more accurate including a nasty left hook with minute left in the fifth round that stunned Judah.    A few seconds later, a Khan right sent Judah reeling before another right on Judah belly button sent Judah down for the count.  Judah did not try to get up and tried to claim a low blow but it became obvious that he did not have any answer for Khan.

Over in England, two very big men fought for the British heavyweight champion but what was at stake was a place for the right to face a Klitschko.    Dereck Chisora faced Tyson Fury in the battle of Britain.

Fury used his height and quicker hands to win an easy decision but in the second round, a Chisora left staggered Fury but after that, he boxed his way to victory. After the second round, Fury unleashed combinations to out work Chisora. Going into the eighth round, Chisora was told by his corner either fight or it is over. Chisora unleashed a right that forced Fury to retreat. The tenth round may have been the best round of the fight as both fighters let loose punches. Fury began the round with a three punch combinations to the body followed by series of other combinations before Chisora connected on his own combinations that forced Fury to retreat. By the end of the round, Chisora looked exhausted from throwing punches and from that point, it was Fury fight to finish off.

Fury took the final two rounds and is now the champion of the British isle and the rest of the commonwealth.  Last December, Chisora was prepared to fight Wladimir Klitschko but Klitschko pulled out with an injury and now he is looking up at fellow British Fury for a shot at the title.   Fury showed continuous improvement but after only fifteen fights, the question that remains, is he ready for a Klitschko?