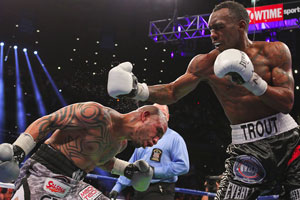 Danny Jacobs can be described as the miracle man as he survived cancer and for him, being alive is victory is enough. For Jacobs, he has already faced death so what goes on in the ring is hardly scary. His opponent was Chris Fitzpatrick, just another obstacle to his shot at a title 유령신부 다운로드.

Over the first three minutes, Jacobs’ skills showed up quickly as his power were crisper and more powerful.In the third round, Jacobs went after Fitzpatrick after an accidental head butt open a cut over Fitzpatrick’s eye. From the halfway mark of the round to the end of the round, Jacobs landed a variety of punches with combination punches that stunned Fitzpatrick twice and Fitzpatrick reeled under the pressure 더존 스마트a 다운로드.

Going into the fifth round, Jacobs had the fight in control as he walked down Fitzpatrick down. Just as he did in the third round, Jacobs pounded Fitzpatrick around the ring but Fitzpatrick took Jacobs best as he managed to end up on his feet despite being nailed with right hands. The round concluded with Jacobs nailing his opponent with one solid shot after another. The last thirty seconds pounding convinced Fitzpatrick that another round was not in his best interest and Jacobs won on a TKO 영화 거인 다운로드.

Over the first three minutes, Velez showed he more power with his straight right and left hook; he continued this in the second round as he took his game up to another level 음력 달력 다운로드. Velez ripped left hooks that followed left jabs and concluding many of his combinations with right hand that turned Sanchez head around. At the end of the round, Velez concluded the second round with a giant right that sent Sanchez down. Only the bell saved Sanchez for round three.

At the beginning of the third round, Velez jumped on Sanchez and another combination ending with an upper cut sending Sanchez down for an eight count 배경 음악. Velez continued to pound Sanchez around the ring before referee stopped the fight.Sanchez came into the ring with his Uncle robe and fought in his Uncle’s boxing pans but he did not have his famous Uncle skills.

The main event saw Miguel Cotto vying for Austin Trout junior Middleweight title.Cotto was the favorite since he faced many of the top fighters in division ranging from junior welterweights to junior Middleweights but the big question, was this veteran an old 32? Trout boxed effectively for the first three minutes as he nailed Cotto with straight left.

In the sixth round, both fighters exchanged opportunities to walk each other down but when Trout moved forward as the aggressor, he got nailed with counter shots from Cotto. With the fight half over, Cotto momentum began to take hold with his power but it was a competitive fight.

Trout fought a smarter seventh round as he boxed effectively as he jabbed and used his straight left. He control the round against Cotto, whose faces started to bruise. Trout continued his boxing skills throughout the eighth round but Cotto did manage to land a swarming combination near the end of the round.

Throughout the tenth round, Cotto looked like he slowed down as Trout managed to lace him with combinations but Cotto landed a solid combinations at the end of round and Showtime Al Bernstein observed that maybe Cotto could have stolen the round.During the eleventh round,Trout tagged Cotto with several combinations, with a straight left with forty five seconds left that popped Cotto’s head up. Trout pursued Cotto over the first two minutes of the final round.Cotto landed an uppercut that appeared to get Trout attention but Trout closed the final forty five seconds of the bout with combinations. While Cotto looked like he was turning the fight in his favor at the halfway mark but over the final half of the fight, it was Trout who dominated the action while Cotto slowed down.

Tension began to arise as both fighters waited for the judges to decide their fate. Trout threw more punches and was slightly more accurate according to Compubox and even landed more power shots. The score card was 117-111, 117-111, 119-109 and the scores were wider than action in the ring merited. (I had 116-112 but it could have even been closer. Showtime Al Bernstein had it 115-113, and Steve Farhood agreed with the two judges 117-111 while Paul Malignaggi had it even.)

Trout showed that he belonged to the upper echelon of the division and defeated a worthy champion in Cotto. As for Cotto, he looked slower over the final three rounds and it was as if, those past wars may have taken their toll. For Trout, he had one big fight to help cement his place among the best, that would be a fight with Saul “Canelo” Alvarez in a battle of undefeated fights. While Alvarez was hoping to fight Cotto for a big fight but a Trout-Alvarez would be a battle of a young boxer at his peak against a slugger at his peak.