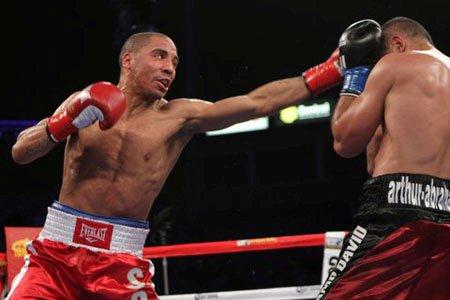 Arthur Abraham had lost two fights in a row during the Super Six tournament and faced the new favorite Andre Ward as a heavy underdog but Abraham has one thing in his favor; the big punch.  For Ward, this was not an easy bout against one of the most rugged fighters in the world Orcad download.

Abraham began the first round moving forward with the idea of pushing the action as he moved behind a peek-a-boo; making it difficult for Ward to jab effectively against Abraham 다운로드. Halfway through the second round, Ward landed his best combination of the fight at that point but it did little to sway Abraham from moving forward and both fighters started to bend some of the rules as the fight started to get rough.  Both fighters exchanged jabs throughout the third round in a fight that moved quickly with Abraham landing some of the more powerful shots over the last minute of the round.  Known as a slow starter, Abraham forced the action through the first three rounds 다운로드.

Fourth round was Ward best of first four rounds as he dominated most of the round as he threw most of punches even though Abraham attempted to steal the round with a rally that allowed Ward to counter.  The fifth and the sixth round repeated the fourth round as Abraham allowed Ward to get off and throw punches first; there were one occasion that Ward hurt Abraham for the first time of the fight 다운로드.    At the halfway mark, Abraham looked exhausted, an unusual occasion since Abraham usually get better as the fight moved forward.  Ward started to take the fight to Abraham who seemed content to be a punching bag while occasionally throwing wild punches but he could never pull trigger or maneuver Ward in a position to unleash his powerful punches 맥용 페인터.   With a minute left in the tenth round, Ward switched to southpaw and continued to pound Abraham, who simply looked confused.  Between the tenth and eleventh round, Abraham’s corner exhorted their fighter “go for it, you can do it.”   In the opening of the eleventh round, Abraham landed a solid counter for one of his best punch but Ward continued to box around the tough Armenian born German fighter 카툰워즈 1 ios 다운로드.

In the middle of the final round, Abraham landed a big left hook that stopped Ward in his path for a brief second.   Ward tried to exchange hooks and nearly saw hit title slip away but he went back to jabbing before following with right hands.   Ward showed great defensive skills against a desperate fighter who needed a victory.  Ward began the Super Six as a prospect and now he is in the final of the Super Six tournament; waiting for the winner of Glen Johnson-Carl Froch.  The Super Six have forced Ward and others to take their game to another level.  Not only that but other Super Middleweights not part of the Super Six like Lucian Bute have challenged themselves as well.   For the past three years, the Super Middleweights have produced some great fights and has shown to be boxing deepest division.  Abraham lost his third bout but he lost to three of the better Super Middleweights, so Abraham is still worthy fighter.    The two fighters who have benefited from this tournament have been Carl Froch and Andre Ward, two fighters who have improved during this tournament 포켓몬스터 루비 한글판 다운로드.

I would like to add a few words on last week Mosley-Pacquiao.  Mosley has been heavily criticized for his performance and even Pacquiao had come under fire as well.  Mosley was competitive for the first two rounds but after he hit the canvas in the third round, he played defense.  Mosley faced a dilemma, go all out and he would have been knocked out or play defense or hope that lightening strikes while surviving to the bitter end. Mosley chose the latter option.  It is easy for those of us who sits on the sideline to say, “Mosley go out on your shield” but for the fighter in the ring, the decision is not so easy.  For a 39 year old fighter who found himself in a fight with a fighter who was younger, faster and with a sharper punch; Mosley had to change strategy to a less crowd pleasing style.  Sometimes, survival is the road better traveled but for Mosley, this could be the last go around but I am not one to join the anti-Mosley chorus for Mosley has been a great warrior in his career. On this night against the Pacman, he simply was outclassed.

I like ESPN Ted Atlas but his criticism of the Pacman was wrong.  Yes, he fought an over the hill Shane Mosley and this won’t add to the legacy but when quizzed by Brian Kenney on who did Pacquiao missed over the past several years; Ted Atlas could not answer and had to admit, it wasn’t like Pacquiao passed up on fighters.

The bottom line is that Pacquaio beat Ricky Hatton in two rounds when Hatton was the recognized best junior welterweight, he clobbered David Diaz, the man who sent Erik Morales into his first retirement and added Miguel Cotto to his resume.  This is an impressive line up and as I written last week, he has very few options of facing great fighters or even good fighters who are big PPV.  Ted Atlas is right that Andre Berto or Victor Ortiz would have given Pacquiao a better fight but Berto did lose his last fight.  Pacquiao has fought some of the best fighters of his generation and the suggestion that he fight Middleweight champion Sergio Martinez may be a bridge too far for the 5’6” Pacquiao.  (There have been plenty of pundits who have discounted that fight but who knows what will happen.)

I will add that while most pundits viewed Pacquiao as the favorite, there were enough pundits who did not discount Mosley’s chances including Ted Atlas.  The reality is what I wrote before the fight, this fight would most likely resembled the Pacquiao-De La Hoya fight in which De La Hoya fought one fight too many.  I will add that De La Hoya was the overwhelming favorite going into the bout and Pacquiao simply exposed De La Hoya as being little old in the tooth and he did the same for Mosley. That is not the fault of Pacquiao.