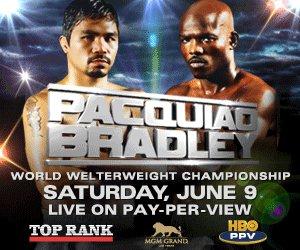 He defeated Devon Alexander in a rough fight that saw an accidental head butt prematurely ending the fight. Bradley imposed his will on a slick boxer and he won a decision against a knock out power puncher in Luis Abregu 다운로드. The only knockout victory over the past five years was against an aging Joel Casamayor for the WBO light welterweight title in his last fight.

Against Manny Pacquaio, he will be facing a fighter with fast hands and knockout power and the PACMAN is one of the greatest pound for pound fighter of his generation 다운로드. There is one factor in Bradley’s favor rarely discussed and that is the age factor. Bradley is coming into his prime at 28 and Pacquaio is now 33, so we can assume that Pacquaio is traveling on the down side of his career 다운로드. No one can out run father’s time and we don’t know when a fighter looks old in the ring, in particular a fighter who has his share of tough fights against quality opponent like Pacquaio 클럽 나라 다운로드.

For the PACMAN, his advantage lies in two areas that often prove decisive in a fight of this nature, power and speed 다운로드. Pacquaio has become a more flexible fighter over the years as he learned to box when he needs to and he has become a two handed fighter. Earlier in his career, he was a one punch fighter, going for broke with his powerful left hand but now, he throws combinations so he have flexibility when dealing with Bradley 자상무색 다운로드.

Unlike Marquez, Bradley doesn’t exhibit a lot of movement so Pacquaio will not be chasing Bradley but on some occasion being the matador to Bradley bull like rushes vmware fusion. Against Alexander, Bradley made the Saint Louis boxer uncomfortable but can he repeat this with Pacquaio, by sticking close to Pacquaio and making him uncomfortable with his inside tactics 폴라리스 랩소디 다운로드?

I don’t see Pacquaio losing this fight for the simple reason, Bradley style may be perfect for Pacquaio since the PACMAN will be able to hit Bradley at will but then Bradley will be able to strike back since Pacquaio does not have the same defensive skills as Mayweather and his offense often prove to be his defense as Pacquaio launches punches in bunches. Pacquaio can play offense against Bradley and his hand speed will allow him to prevail in the most exchanges. Bradley is a tough fighter and this could go the decision with Pacquaio winning a unanimous decision. If there is a stoppage, it will be the PACMAN doing the stoppage.