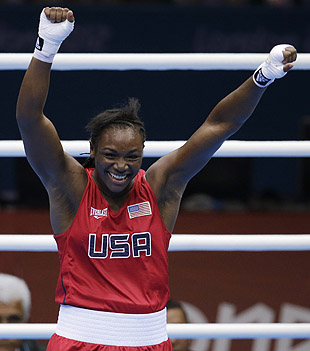 As expected, in the semifinals, the fix was in once again in Marlen Esparza’s bout with the Chinese boxer 다운로드. When Marlen was down 3-2 after the first round, a round in which the Chinese boxer did absolutely nothing but wait and step back and occasionally throw a counter that missed, and never came close to landing a punch, I knew then they were going to “do” Marlen 다운로드. Afterwards, when asked if she should have been more aggressive and tried even harder, Marlen made a poignant, insightful, and accurate comment, which was that if she took more risks and threw more punches, they would have had her down by even more pc용 카톡. And that is a sad but truthful commentary on amateur boxing, and also explains why these bouts have utterly lost their entertainment value. The more you try to be aggressive against these boxers who look to wait and jump back and only throw quick arm-punch counters, the more the international judges will have you losing 다운로드. So Marlen tried to play their game as best she could, but nevertheless, she was an American, which meant that if it was close she was going to lose. You damn near have to kill your opponent to win in this tournament 스타 빠른무한 다운로드.
Claressa Shields did what she needed to do to get into the final, which was beat the living hell out of her opponent. She has blazing fast hands, plenty of pop on her punches, and I love the way she puts together her punches in bunches, firing fast and hard combinations. She works the body and head. I also like the way she does not allow her foes to clinch her much, for she really works that inside short right very well and makes them pay for trying to lay in on her. And as soon as she gets some room, she follows up with more blows.
In the gold medal match, Shields once again showed her hand speed, power, grit, and winning championship determination and demeanor. Whether you come at her or try to box, she is going to find a way to nail you some good ones. Her head movement was solid too. She just seems to have that attitude that she is there to win clearly and to hit and hurt you. She was the most amazing talent that I saw in the Olympic Trials, and she once again proved it in the Olympics. Her victories were the most clear in the entire tournament, for any woman.
And Shields was the only gold medalist boxer for the U.S.
Kudos to Marlen Esparza for bringing home bronze as well. She has nothing to be ashamed of. She fought well and lost close to a spoiler.
Esparza and Shields were the only boxing medalists for the U.S.
I and others have been saying all along that women boxers need to be respected more in the U.S., and afforded better treatment, and not dismissed as second class citizens. Hopefully these medals will go a long way towards justifying that, and changing some hearts and minds.