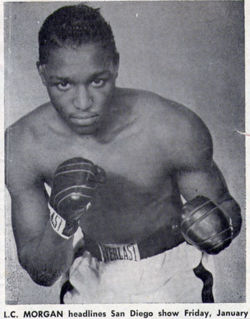 From his professional debut in 1954 until his final bout in 1969, Youngstown, Ohio’s L.C 다운로드. Morgan would fight anyone, anywhere, anytime. It is boxers like Morgan that keep the game alive. He was not good enough to be a champion or a top contender but he was tough enough and talented enough to test anyone who thought they could be 다운로드.

He had 125 recorded fights and walked away with an impressive 79-43-3 record while fighting some of the best boxers of his era. He went all over the world to ply his trade and had little hesitation boxing in someone’s hometown 다운로드. He knew if it was on the up and up he could compete with almost anybody.

In only his second year as a pro he outpointed the great Glen Flanagan. That ushered him in to the big time and from this point on he would win two or three then lose one but most of his competition was top shelf. In 1957 he would defeat Don Jordan but later he would be stopped in three rounds by Stan Harrington. In 1959 he would defeat Joe Miceli. By 1961 he was crossing gloves with the very best. That year he would outscore Eddie Perkins but close the year losing in England to Dave Charnley.

From 1962 through 1965, Morgan had several fights winning as many as he was losing facing some of the world’s best. During this period he was doing a lot of fighting in Mexico and making quite a name for himself. The year 1966 saw L.C. engrave his name in the history books. In August he halted future World Welterweight Champion Jose Napoles. Later in the year he would split a pair of knockouts with former junior welterweight champion Carlos Hernandez. In 1967 he would lose twice to Ramon LaCruz. He would also lose to Hall Of Famer Nicolino Locche. Jose Napoles would avenge his loss to L.C. while marching to his tenure as welterweight champion.

The last two years of his career saw L.C. losing on a regular basis. In fact his last two losses were to future junior middleweight champion Oscar ” Shotgun ” Albarado.

A special thank you to Jim Borgen for assisting in researching this article.

One thought on “Youngtown’s L.C. Morgan”