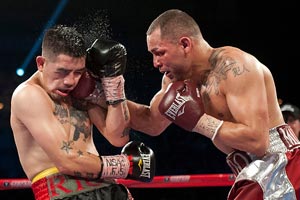 By Tom Donelson / Member Boxing Writers Association
HBO on Saturday featured Brandon Rios and Mike Alvarado in a slugfest.  Before the main event, Terrance Crawford challenged Brandis Prescott in a match between a prospect and a veteran Netbus download. For the first two rounds, Prescott started out aggressively but by the end of the second round, Crawford managed to stem the tide of Prescott aggressive nature with accurate punches. At the end second round, Crawford switched to a southpaw stance and kept that stance throughout the third round as he scored points 다운로드. The one negative was that Crawford in his southpaw stance became vulnerable to Prescott’s right hand, which was Prescott best punch.
Halfway through the bout, Crawford played the boxing version of four corners as he moved in and out while avoiding getting hit by Prescott 심해소녀 다운로드. While Crawford kept the fight in slow motion with very few punches being thrown; the audience was not appreciative of the effort as they wanted just a little more action. Throughout the sixth round, Crawford counterpunched effectively as he took advantage of Prescott aggressive onrushing style. Crawford moved back and forth from his southpaw to orthodox and back; confusing Prescott.
Crawford continues through seventh and eighth round maneuvering away from Prescott while landing effective counters set up by jabs. Prescott managed to land a big right hand early in the ninth round but as the round progressed, it was Crawford who landed the bigger punches as Prescott missed with wild shots just as he did in the previous rounds. For the first half of the tenth round, Crawford landed several combinations as he chose to fight but after nailing Prescott with combinations; Crawford spent the second half of the round boxing. Compubox had Crawford winning every parameter and support the wide unanimous decision in Crawford’s favor.

In their first fight, Mike Alvarado allowed the fight to become trench warfare and this allowed Rios to win by stoppage. Alvarado started the first round boxing and Alvarado had success in landing looping punches from the outside but near the end of the round, Rios managed to land a series of short sharp punches in an round that match the intensity of the first fight.   Rios continued to pressure Alvarado in the second round and stunned Alvarado with a left that nearly decapitated Alvarado and Rios launched a series of punches that wobbled Alvarado.  If Rios wobbled Alvarado with his left in the second round, Mike Alvarado wobbled Rios with a right hand with a minute left in the third round and now it was Rios turn to survive.

Alvarado used his right hand in the fourth and fifth round to his advantage as he neutralized Rios left hand and started to win rounds. His ability to maneuver allowed him to unleash his combinations in particular his right hand.  The sixth round saw both fighters land with their best shots, Rios left and Alvarado his right. Rios did manage to gain some advantage over the last thirty seconds as upper cuts and hooks send Alvarado reeling.  HBO Harold Lederman had the fight even and his score reflected what happened in the ring over the first half of the bout.

In the seventh round and eighth round, both fighters simply landed big shots and both fighters seemed intent on destroying the other. The difference between the two is that Alvarado mobility allowed him to land his right more often.

Alvarado used the tenth round to possibly push ahead on the scorecard and landed some great combinations over the last minute of the tenth round but Rios used his jab at the beginning of the eleventh round to set up his combination and he seemed to hurt Alvarado for the first time since the second round.   With one round left, it was anyone’s fight and a hard fight to score even though I had Alvarado slightly ahead going into the final stanza. Alvarado used his feet to set up some combinations and with twenty seconds left, Alvarado landed a left hook that wobbled Rios and that sealed the deal.  Harold Lederman had it 8 to 4 and I had it 7 to 5 in favor of Alvarado.
This fight was a classic fight in which both fighters showed tactical skills, and heart to take each other best shots. And this was a fight that left fans wanting more.  Rios-Alvarado 3.