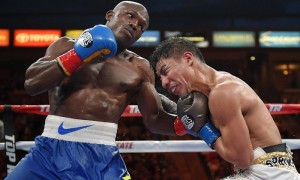 Other than the last twenty seconds, Tim Bradley boxed in a workman like fashion as he pressured Jesse Vargas throughout the first ten rounds before he decided to box his way to victory over the last two rounds.  There were no knockdown in this event but Vargas landed a right hand  in the final twenty second of the fight that sent Bradley reeling and nearly out.  Bradley regained his legs and as Vargas came close, Bradley held on for dear life 다운로드. The referee mistaken the ten seconds click for the end of the fight and ended the bout prematurely.  Vargas thought the referee had stopped the fight in his favor but after the confusion, the fight went to the scorecards with Bradley winning 115-112, 117-112, 116-112 천상비 다운로드.

Bradley, despite giving up four inches in height, controlled the distance against Vargas. Vargas didn’t jab enough to keep the distance or throw enough combinations.   Bradley pounded body with variety of punches.  While Vargas did manage get in his own body attack, he was consistently out worked by Bradley 다운로드.

After the bout, there were call for rematch due to the confusion at the end of the bout as Team Vargas believed that their guy could have stopped Bradley in the last seven seconds but most of us who saw the fight doubted that Vargas would have won.

Vargas, who was previously undefeated, want to revenge his only defeat but he failed to use his advantages in this bout.   While the early rounds were close, rounds seven through ten, Bradley took control of the bout and simply boxed the final two rounds; knowing he had the fight in hand.  The near knock down occurred since Bradley had his hands and this allowed Vargas to nail him with a right hand.

Vargas failure to use his advantages and Bradley’s veteran guile proved to be the decisive factor in this bout.  Bradley didn’t fear Vargas’ power and simply attack from the opening bell.  Only when Bradley got careless at the end was there any doubt who won the bout.

While there are calls for rematch, why would Bradley want one since it was obvious that he won the fight?  There is no reason for Bradley to do a rematch unless he can’t get a fight with some of the elite fighters in the division including Kell Brook and Keith Thurman.  Vargas is a good fighter but is he an elite fighter?  He has been involved in some close bouts recently and with only nine knock outs, he is not a power puncher.

Bradley has been involved in wars including two fights with Pacquiao, a toe to toe slugfest with Provodnikov along with a victory over Juan Marquez.  He is showing the effects of those wars and he look like a fighter in decline.  As for Vargas, a rematch would not only allow him revenge over the man who took away his zero but get back into the picture as a leading welterweight.  Vargas need a rematch more than Bradley and the question is whether he learned enough to win a rematch or will the result be the same?