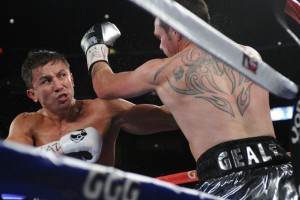 By David Martinez / dmboxing.com
On Saturday night, Gennady Golovkin (30-0 / 27 by KO) stopped Daniel Geale (30-3 / 16 by KO) at 2:47 of the third round at Madison Square Garden to successfully retain his WBA middleweight title 다운로드.

The fight was short with Golovkin handling Geale throughout with ease 울펜슈타인 3d 다운로드. Golovkin recorded a knockdown in round two, but the beginning of the end actually came with a series of punches late in round three. Geale landed a right to Golovkin’s head, as he was instantly countered by a right hand to the nose that was followed by a left hand that sent Geale to the canvas, with referee Mike Ortega stopping the bout at 2:47 into the round 다운로드.

Golovkin is certainly the best today at 160 pounds, and in my opinion, would have no trouble moving up to 168 pounds to handle the bigger fighters at super middleweight 다운로드.

A unification fight loams with a possible match with WBC middleweight “lineal” champion Miguel Cotto, which would draw record numbers at Madison Square Garden, New York. At this moment Cotto has a scheduled  bout with Julio Chavez, Jr. in December, so any possible future bout with Golvokin would be in 2015 – next year?