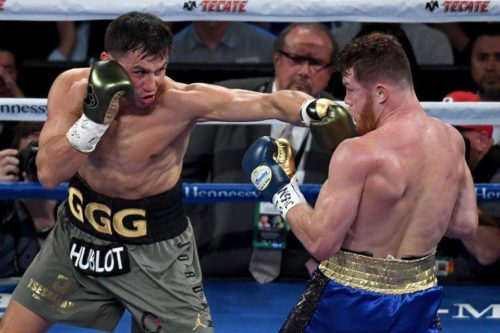 There is nothing like the anticipation of a big fight and Saul “Canelo” Alvarez faced ‘Triple G’s” Gennady Golovkin in the most anticipated fight of the year with two of the best Middleweights fighting, adding to the history of one of most celebrated division 한글 2014 교육기관용 다운로드.

The first round began with Triple G’s coming forward as Alvarez boxed and using his feet to set up his punches.    Triple G’s jabbed while Alvarez countered with two big rights of his own 윈도우7 자바 다운로드. A close round to score with Alvarez showing defensive skills.  Lederman had it for Golovkin but could easily been scored for Alvarez.

The second round saw Golovkin showing respect for Alvarez and Alvarez landed single punches but punches had yet hurt Triple G’s and Triple G’s failed to land the big punch.  Golovkin, like Alvarez, had yet to land a combination.  This round easily went to Alvarez as he landed twice the power shots.  Could have been Alvarez two to zero or an even fight 신서유기5 3회 다운로드.

Golovkin starts the third round with jabs while Alvarez landed a couple of combinations including body shots.  Alvarez movement avoided three big Golovkin shot but by the end of the round, Golovkin started to force Alvarez to the rope.  This round went to Alvarez in my estimation.  Harold Lederman had it two to one and I had it three to zero for Alvarez 다운로드.

In the middle of the fourth, Alvarez stayed on the rope as Golovkin landed his first big flurries of body shot.  Triple G’s landed three big rights over the last minute and Triple G’s easily won this round. HBO had it two to two even and I had it three to one for Alvarez.

Alvarez managed to keep most of the sixth round in the center and landed good combination while Triple G’s landed a few power shots of his own. This was a close round but I gave this Alvarez the round and Harold Lederman had it the other way.  Halfway through the fight, HBO has it 4 to 2 for Golovkin and I have 4 to 2 for Alvarez and Max Kellerman stated that both of us could be right.

The eighth round began in the center of round but Golovkin own defensive techniques frustrated Alvarez as Alvarez not able to counter successfully plus Triple Gs forced Alvarez to the rope as he successfully cut off the ring.  This was another Golovkin round as he is taking control of the fight.  Alvarez at this point has yet to really hurt Golovkin.    I had the fight even and HBO has it 6 to 2 for Alvarez.

Alvarez won he first minute in the ninth round but after the first minute Triple G’s pushed Alvarez around the ring and walking through Alvarez best shots, not a good sign for Alvarez with three round left.  The fight looked slipping away from Alvarez.  This was another Gennady round and I had Golovkin by one.

The tenth round saw Alvarez nail Triple G’s with a combination and for the first time, he stunned Golovkin but as the round progressed, it is Alvarez who retreated as Golovkin regain his control of the round. With two rounds left, I had it six rounds to four for Golovkin.

Alvarez landed solid combinations and countering Golovkin but Golovkin walking through the punches but Alvarez landed the most punches throughout the eleventh round.  I gave the round to Canelo but it was close round that could be scored for Golovkin.  On my score card, I had Alvarez needing the final round for a draw and a 10-8 round to win but there was no evidence Alvarez could knock Golovkin down.

Alvarez started out fast over the first minute of the bout while Triple G’s moved forward. but Alvarez landed more punches throughout the final round and on my card, I had the final score 114-114 and Harold Lederman had it 116-112 for Golovkin.  One judge had it 118-110 in favor of Alvarez and the other judge had it 115-113 in favor of Triple G’s with one more judge calling it a draw.  I couldn’t understand the 118-110 score card for Alvarez but the most I could have seen Alvarez winning was by a 115-113 margin and neither fighter won ten rounds.

This was a good fight and a close fight, worthy of a rematch.  This fight lived up to the hype as both fighters did what they needed to do. Alvarez showed boxing skills and won those portion of the fight that were in the middle of the fight but Golovkin cut off the ring and forced Alvarez to fight. When the fight went to the rope, Golovkin held the advantages.  As for the fight scoring, it is generally agreed that Alvarez took the first three rounds and took the last two rounds while Golovkin dominated rounds 4 through 10.  If you believe that Golovkin took all of the rounds between 4 through 10, then you would have Triple G’s winning the fight but if you gave one of those rounds to Alvarez, you end up with a draw.  This was one of those draws that didn’t leave the fans angry as a case could have been made for both fighters.