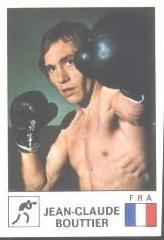 Contributed to dmboxing.com since 2008

To me Jean Claude Bouttier was one of the best fighters of a great era who never won a world title 다운로드. He joins Pierre Fourrie, Yaqui Lopez, Bennie Briscoe, Hedgemon Lewis, Ernie  “Red ” Lopez, Armando Muniz and Ray Lampkin who were boxers fighting in the wrong place at the wrong time 판의 미로 다운로드. Even some boxers who held a fragment of a title never got the recognition they deserved because of other dominant champions. Men like Rodrigo Valdez, Esteban DeJesus and Howard Winstone 다운로드.

Bouttier was probably the most popular French fighter since the beloved Marcel Cerdan. He became a professional in 1965 and by 1969 he was beginning to meet some of the better middleweights in the world 위기의 남자 다운로드. He lost two decisions to the under rated Juarez DeLima and drew with countryman Max Cohen.

Jean Claude posted a big victory in 1970 outscoring Stan ” Kitten ” Hayward 다운로드. He also beat DeLima but lost to Lonnie Harris. Bouttier bounced back to defeat Pascual DiBendetto, Tom ” The Bomb ” Bethea and Harris in a rematch 다운로드. He then won the European title with a fifteen round decision over Juan Carlos Duran.

He continued his march to a shot at the world title by beating Raul Soriano, Bunny Sterling, Manny Gonzalez, Doyle Baird and Fabio Bettini 다운로드. On June 17, 1972 Bouttier met the great Carlos Monzon for the world’s middleweight title. The bout was held in Paris. I’ll never forget this fight 베토벤 바이러스 노래. I was married for the first time that day. As soon as I could free myself from the ” festivities “, I rushed home to watch it. ” King ” Carlos stopped Bouttier that day but Jean he would return 유튜브 flv 다운로드.

Jean Claude began his comeback with disqualification victories over Jose Chirino and the great Emile Griffith. He then beat Joe DeNucci, Art Hernandez and Alvin Phillips 다운로드. On September 29, 1973 he met Monzon again in Paris. This time Bouttier gave Monzon all he he could handle but he faded down the stretch and dropped a fifteen round verdict.

Two fights later Bouttier lost his European title to England’s rugged Kevin Finnegan. In his last fight in December of 1974, he lost his French title to Max Cohen. Bouttier had 72 fights in his fine career. His record was 64-7-1. He scored 43 knockouts. I have no doubt in my mind that if he was fighting today he would have won one of the four titles available. Monzon had high respect for Bouttier. That is a compliment.