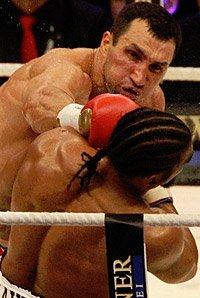 At the beginning of the twelfth round, Haye shot a solid right that forced Klitschko to hold and then Klitschko threw some combinations of his own as he forced Haye to retreat.  In a round that showed the potential of the fight could have been; instead it prove to be the exception to the rule.  A fight that saw the loquacious Haye be reduced to fighting survival and had one round that he connected on one punch.  The fight that was suppose to be dynamite turned into a whimper; leaving fans wondering who can actually challenge the Klitschko’s brothers internet explorer 무료.

My thoughts on Klitschko brothers:

Wladimir Klischko is 17-2 in championship fights and in a fight that was supposed something special, he turned David Haye into yet another victim.   For many boxing fans, the Haye-Klitschko bout had a buzz not seen since Vitali Klitschko fought Lennox Lewis and the year before that, Lewis defeating Mike Tyson.

Wladimir Klitschko has three problems in trying to access his greatness. The first problem is that he never faced the other great fighter of his era, his brother Vitali. Both brothers decided early on that they would never fight each other and quite frankly, this would have been the best fight of the decade but it is a fight that will never happen.  Between the two, they own all the various championship belts worth having.

Between the two fighters, they have combined for 98 victories and 88 knock outs plus they have won 26 championships fight and only lost 3. No two fighters have been as dominant over the past decade and they are the Heavyweight division.

The second problem is that the Klischko’s brothers followed one of boxing golden era’s for heavyweight division in both skills and popularity.  Klitschko’s never caught the public imagination as Mike Tyson, Evander Holyfield or Lennox Lewis dix and the 90’s was one of boxing strongest period in heavyweight history. While some old timers and boxing historians would dispute this but the 90’s featured great hall of fame fighters including not only Holyfield, Tyson and Lewis but George Foreman who came back to win a title against the then undefeated Mike Moorer and even Larry Holmes still was a top ten heavyweight.   It could be argued that today’s crop of heavyweights have been weak, certainly when compared to the 90’s.

Many of the European big men have extensive Amateur experiences and develop boxing skills that their American counterparts for the most part don’t have.   Klitschko have combined boxing skills and size in a package.  While HBO Jim Lampley have quipped that it is too unfair for they are simply too big and too good, Lampley misses the reason for their success.  They are simply too skilled and they are the hardest working heavyweights and Lampley once observed is that to beat the Klitschko’s brothers, you have to turn the sport into a 24/7 and 365 day job.  There are plenty of big fighters in this era but none of them work harder or as skills as the Klitschkos.

How can you rate the Klitschko’s?  Vitali have the reputation of being the tougher of the two, this being the result of his fight with Lennox Lewis but what has hurt Vitali’s career legacy was his four year layoff due to injuries before he came back to being an elite heavyweights.   As for Wladimir, his story begins when he hooked up with Emanuel Stewart, who showed Wladimir how to use his height.  Stewart turned Lennox Lewis into the boxing best of the 90’s when he taught Lewis to use his natural size to its utmost advantage and he did the same for Klitschko.  Wladimir went from being a European style fighter to a more complete fighter with a variety of punches including combining the left hook with his one-two left right combination.

Vitali has always been effective in using his height not just for offense but also add to his defensive skills.  What both Klitschkos have done is what great fighters are supposed to do, beat those fighters in front of them.  Over the past six plus years, they have won those fights easily, rarely been tested.  They have dominated the heavyweight division.  The Klitschko’s brothers have combined the cerebral with their skills.  Their record speaks for itself and yes, maybe they have fought in a weaker division but they also dominated that era and there is nothing over the horizon to challenge them.  This is the Klitschko’s era.