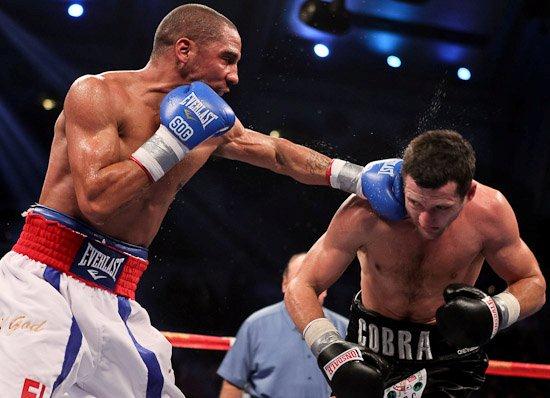 Andre Ward and Carl Froch faced off in the final of the Super Six title; the winner recognized as the best of the Super Middleweights with a big fight over the horizon with Lucian Bute. Going into this fight, it was a tossup as Ward was a 3 to 1 favorite stateside but among British boxing fans, it was 3 to 1 in reverse.

In the opening minute of the bout, Ward snapped a left hook inside in a clutch but the first minute of half saw a feeling out process 다운로드. Over the last minute, both men landed body shots on the inside as Ward jab was slightly more effective as he landed twice as many jabs as Froch.

Beginning in the second round, Ward jab allowed him to land a couple of rights in the opening minute but as the round progressed, Froch landed some solid jabs to set up a long right. But over last minute of the round, Ward landed a left hook while Froch countered two left hooks to the body as he trapped Ward to the rope but a Ward left hook forced Froch to retreat and this was followed by yet another Ward’s left hook ending the round 다운로드.

Ward began the third round with solid jabbing as his accuracy befuddled the British fighter, who looked for ways to score with jabs of his own. With a minute left in the round, Ward jab set up a sharp left hook whereas Froch concentrated on body shots. The last twenty seconds saw both men fighting in close quarters as they connected on body shots even though Ward’s shots looked sharper 다운로드.

Ward strategy of fighting inside looked good in the fourth round as he used his quick hands to nail Froch with of variety of shots as his jab allowed him to use his right and left hooks. Over the last minute, both men went inside again but Ward punches were cleaner and he ended the fourth as he did the second with a left hook.

In the past, Froch showed himself to be a man who wore his opponent but in the opening of the fifth round, Ward continued to fight effectively on the inside 다운로드. Over the last minute, Froch chased Ward back to the rope with three wild rights that have missed before Ward shot a bolo punch and ended the round with three clean left hooks.

Froch opened the sixth round with combinations but most of the shots missed as Ward more accurate counter connected in return. Ward landed a double left hook in the middle of the round as both fought inside 일러스트 벡터 다운로드. Froch landed two rights and a left hook but Ward nailed Froch solid hook that forced Froch to the rope and just as he did in the previous rounds, he punctuated the round with a left hook.

Going into the second half of the fight, Froch was behind on the cards as Ward connected on nearly twice as many punches. For Froch, he needed to push Ward to change the momentum and Froch granite chin allowed him to survive some solids shots 용용공주 다운로드. Ward continued to connect with some solid shots but Froch did manage to connect with right hands but Ward punching and accuracy gave him the advantages.

Froch began the eighth round by attacking and Ward looked contented to box the opening minute but at the half way point Ward nailed Froch with a solid right for the best punch of the round and Ward quickness and hand speed continue to befuddle Froch 삼국군영전4 다운로드. The round ended with a Ward right hand and Froch best punch came after the bell sounded. While Ward looked like he was winning the round, his left eye started to puff.

Ward boxed the opening half of the fight as Froch attacked but by the end of the second half of the ninth round, but Froch landed some solid combinations as he pushed Ward back and forced Ward to switch southpaw. Froch dominated the final thirty seconds of the round as he finally appeared to win a round cleanly.

Both fighters began to exchange punches at the opening of the tenth round as Froch attempted to follow up on a solid ninth round. The tenth round continued to be even as both fighters connected on solid jabs and right hands. Ward nailed Froch with solid hook with thirty seconds and the question, was it the punch that could have given him the round in a round that was close?

Froch may have been behind going into the championship rounds but he had won three bouts with late round heroics including a knockout win over Jermain Taylor in the twelfth round in a fight that he was losing. The eleventh round was like the tenth, a close round with neither fighter landing a solid punch that could prove decisive in rewarding the round.

Froch started the final stanza with a solid combination in a round he needed not just to win but to win by knock out and repeat the Taylor miracle. Ward contented to box the opening minute and half. Froch loaded on his right but he ran into two Ward solid left hooks. Ward boxing skills allowed him to avoid several shots by Froch and he ended the round with a left hook. Ward won the last round with accurate punches and solid defense as he avoided some very mean Froch right hands.

Ward won the unanimous decision in a fight that showed his technical skills at a high level against a very good fighter in Carl Froch. Froch fought a tough battle but on this night, Ward technical skills allowed him to strike a 100 more punches over a twelve round bout. Over the past two and half years, Ward moved from a SHOBOX prospect to elite fighter and Showtime produced a series that feature some great and memorable fights among the best in the Super Middleweights.